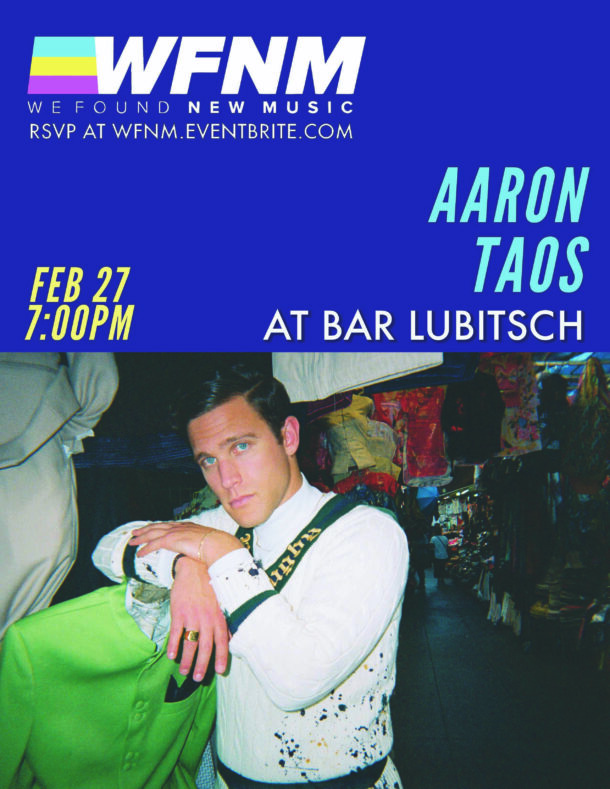 Aaron Taos will be playing at Bar Lubitsch on February 27th, 2020 alongside Chloe Tang, Sheare, and Sean The Star Emperor.

Hailing from New York, Aaron Taos is on the rise following an awesome year! 2019 started for Aaron with his single “Off My Mind”, grooving with a funky bass and an intriguing atmosphere of reverse guitars and gritty synths. His voice is powerful and direct, pushed by an easy coolness that feeds the songs chill energy!

In March he released his album “Birthday Boy”, a collection of ten songs that highlight different aspects of Aaron Taos’ voice, songwriting, and style. The title track is a jam, slowly bumping with big drums, wailing guitars, and a steady bass groove.
Songs like “Denial” & “Communication” move the record to a dreamier place (the latter open with a girl laughing in the distance, both playful and disquieting). On the converse are songs like “Control” & “Take It Easy” with their constant motion and fun rocking energy moved by the steady drums and bass beat. He draws from retro elements and combines them with a strong modern pop sensibility to create this awesome record!

His most recent single “I just fell in love with my ex” is a heartbreakingly relatable track! From the start the track is guided by a clean reverberating guitar and his tightly woven lyricism. As the song moves along, distant vocals lend a haunting atmosphere that contrasts some of the brighter elements of the song while highlighting the sadder feelings behind the song.

Aaron Taos’ songs will be a lot of fun to see live! A fantastic blend of upbeat grooves, slow jams, and heartfelt croons, this is a show you won’t want to miss! We look forward to seeing you at Bar Lubitsch on February 27th, 2020 as Aaron Taos plays alongside Chloe Tang, Sheare, and Sean The Star Emperor!

Nathan Irving (aka Nate Flaks) is a writer for WFNM & 1/2 of the electronic indie-pop duo Sleeping Lion.
2 months ago in Blog, Events
Aaron Taos
Newsletter