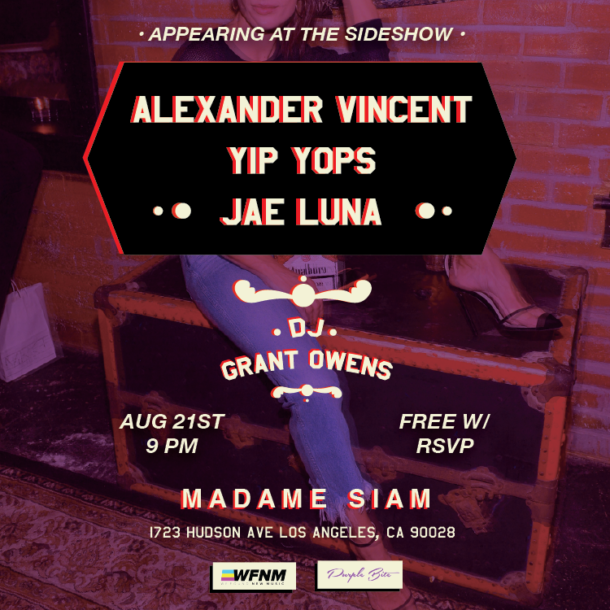 Alexander Vincent’s feeling vulnerable but fulfilled. It’s been four years since the producer/songwriter first gleamed meteoric success as drummer of the band Magic!, with its inescapably catchy, chart-topping single, “Rude”. Now he’s returning to the sound that is most true to him, readying a definitive personal sonic statement that’s been bubbling up inside him for years.

The Coachella Valley is where YIP YOPS were born and still call home. However, there’s an indefinable and indescribable urge that spurned the quartet- lead singer and guitarist Ison Van Winkle, drummer Ross Murakami, bassist Jacob Gutierrez, and keyboardist/ vocalist Mari Brossfield- to send their own kind of aftershocks through alternative music. The band’s singular sound could’ve been signed to Factory Records in 1981, but feels at home on your favorite Spotify playlist. That’s why the group achieved the seemingly insurmountable within a few years of crystallizing its lineup (and graduating high school). They went from gracing the stage at Coachella, Chinatown Summer Nights, and Echo Park Rising to building an organic buzz online. Counting New Order, The Smiths, and Pink Floyd among myriad influences, their sound tempers male-female harmonies over swooning synths, robust accentuated guitars, and hyper-charged beats.

Joseph Lee, aka Jae Luna, is a singer-songwriter/producer based in Brooklyn. His new EP, Projected Self, is a sonic reflection of introspection and self-awareness. Included on the new EP is his first and most praised single, “These Nights”, and its darker counterpart, “Within Your Complex”. This song is about being suffocated by cyclical thinking and anxiety. Suffering from insomnia and depression, Lee sings about staying up through most of his nights, unable to clear his mind of self-deprecating thoughts.