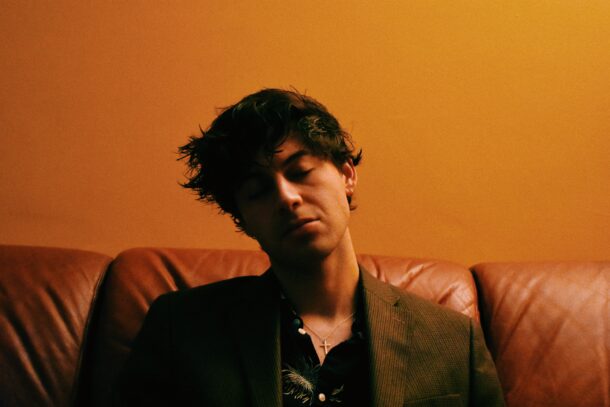 Los Angeles-based producer and singer-songwriter andreas owens releases his 5-track debut EP, aptly titled almost everything i’ve ever wanted to say, an intimate and vulnerable R&B-infused pop record showcasing his ingenious and versatile songwriting. The EP follows a series of singles – “don’t feel happy”, “falling & falling”, and “not much (better than before)” – all of which received high praise by the likes of publications Banger Of The Day, Before The Data, DUMMY Mag, Fashionably Early, Substream Magazine, and We Found New Music; inevitably landing editorial placements on Spotify (Fresh Finds, Fresh Finds: Pop, and Study Break) and TIDAL (Rising: Pop).

The EP immediately draws you in with its safe soundscapes and inviting melodies, and takes you on a full introspective journey of andreas’ mindset. Leading with “bad4you”, a lofi smooth jam that emanates sensual loving vibes, and then eases straight into an even more soft ballad: “not much (better than before)” which spells out an intimate story that sounds like an apology, remorse, and the low vibes we all experienced during this past years’ trying times.

“don’t feel happy” is the centerpiece of the 5 track EP — arguably my favorite song on the collection. The floaty guitar riffs and slightest hints of r&b and soul make this song a sonic favorite.

andreas owens is clearly baring his soul on this project, as “falling & falling” showcases simplicity though repeated melodies and soft beats to carry you through the story ‘almost everything I’ve ever wanted to say’.

The EP completes with final stripped track “speaking with my chest” where he truly does. Audibly speaking, you can hear every single word with clarity and gusto. It’s refreshing to hear his honest and quaint lyricism and soulful rasp shine through in the final song of the story, when his usual sound is typically smoothed over and cushioned by his synthy production. It’s nice to know that underneath all of the bells and whistles, is a talented songwriter who’s got something to say.

“‘almost everything i’ve ever wanted to say’ is truthfully that — it is in every way, nearly everything I’ve ever wanted to say musically, lyrically, sonically, experimentally, and emotionally. For as long as I can remember, I’ve wanted to create and complete a work like this; something where I’ve sat in my room and slowly worked from beginning to end without any real goal in mind. Almost like I’m reading a book about my life, piecing together one experience after another but not quite knowing where or how the story ends.”

The mentality and overall vision behind andreas owens has been pretty different to that of The Millennial Club. Ironically, the biggest distinction between the two projects lies less in the final product, but more so within the creative process itself.

Adapting an “anything goes” mindset helped facilitate a lack of pressure to fit within a specific genre and andreas owens quickly found himself enjoying the refreshing freedom present in creating without convention. This unadulterated creative energy ultimately led to the birth of almost everything i’ve ever wanted to say: a diverse and genre-blending EP that not only reflects his personal growth as a songwriter and producer, but surely defines his personal footprint as a truly generational artist.