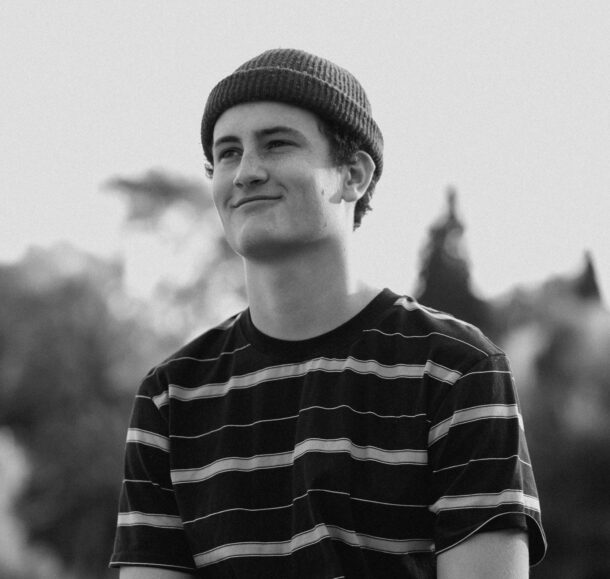 Emerging indie artist Arden Jones drops his second single, “Roll the Dice” (produced by F E R R O) via vnclm_, following the release of the music video for his viral debut hit single, “Parallel Parking”. This upbeat and inspirational track about taking a chance on yourself will undoubtedly be on your daily rotation.

“Parallel Parking” (also produced by F E R R O) got stuck in millions of peoples heads and hearts and simultaneously put Arden Jones on the map. Since its release it has accumulated over 2M streams on Spotify to date and has already been featured in a hefty handful of editorial playlists to date: Fresh Finds, Fresh Finds: Pop, Front Left, and many more as well as charted on the Viral 50 – Australia and Viral 50 – New Zealand Spotify charts. The track has accumulated over 5.5M plays across 2.4K videos on TikTok since its release on January 21st, 2021.

Now he is back with “Roll the Dice” and sharing more from his hip hop side and we are here for it.

“Roll the Dice” is a song about taking a chance and doing something you normally wouldn’t; more specifically, betting on yourself instead of relying on others for your own success. He wrote this song during a time in his life when he was taking risks and not exactly doing what everyone else his age was. Needless to say, it’s clear Arden believes it’s important to simply take a chance every once in a while.

We are so thrilled we got the chance to sit down with this rising star and get to know him early in his promising career. We’re so excited to have discovered this artist who has cracked the code early and learned how to maximize his exposure and get his dope art heard.

Q: Introduce yourself! Who is Arden Jones?

A: Hey there – I’m an artist from the Bay Area who loves making music! I’m 20 years old and grew up just across the bridge from San Francisco. I grew up surfing and skating and climbing but my favorite thing to do has always been playing instruments and songwriting. I did the college thing for a while, but I knew deep down I was supposed to be making music. Now I’ve dropped out of college, moved to LA, and am going for it.

Q: What does music mean to you, personally?

A: In a time when the news of the world is pretty heavy – a pandemic, global warming, mass shootings – I try to focus on what makes us feel happy to be alive. I write about small moments – a first date with a crush, a car ride down the coast, a night out that ends under the stars. And sometimes hard things, like a broken heart or figuring out a relationship, but things that matter between people.

Q: Who are some of your biggest musical inspirations?

A: Mac Miller is my biggest inspiration. XXXTentacion, J.Cole, Chance, and Dominic Fike are also important to me. I’m inspired by a lot of different genres, old and new. For songwriting, I listened to a lot of Conner Oberst and The Avett Brothers when I was young. And the classics, like Prince. I also listened to Jazz.

Q: What’s the story behind your viral single, “Parallel Parking”?

A: I wrote it at a time when I was feeling super happy about life in general and excited about the idea of pursuing a crush. That feeling you have when you first fall for someone and you think it could be really great. I wanted to capture that feeling.

Q: Tell us more about your new single, “Roll the Dice”. What’s the song about?

A: “Roll The Dice” is about a different stage in a relationship – when you have to kind of take a risk to go for it and believe in it. It’s when you want it to work, you think it can work, but commitment is a gamble.

Q: How has your life changed since releasing music to the world?

A: Well, I was in college and working part-time at a surf shop, and thought I’d keep doing that as I tried to get my music out into the world. Lately music has been going so well I decided to drop out of college and go for music full-time. Since “Parallel Parking” was released, a lot has happened and now I get to be in the studio with great producers most days. Songwriting is super fun for me, not stressful at all, so basically my life has changed a lot and in the best way.

Q: Your music has a unique blend of multiple genres. How would you describe your music?

A: I would describe my music as lyrical and melodic rap. So maybe crossover rap-pop.

Q: What do you hope your fans take away from listening to your music?

A: I hope my music reminds my fans that life is good. There’s a lot of dark stuff going on around us but that we can soak up small moments and feel them and look forward to them and be 100% in them.

A:  A LOT of music. I write about a song a day and I have a lot of songs I cannot wait to share.