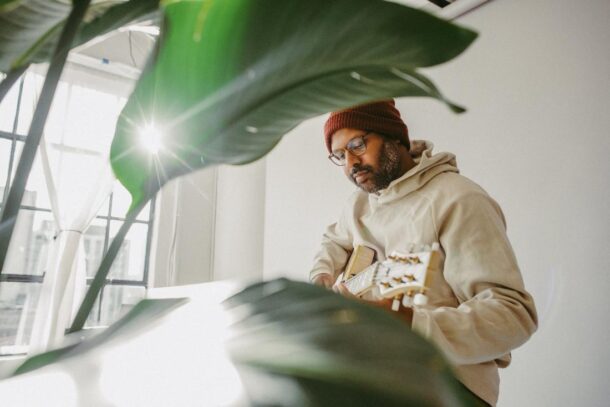 There’s a certain freedom to existentialism, once we learn to embrace it. That’s the message of much of renowned singer-songwriter Bhi Bhiman’s first studio album in four years, I’ll Sleep When I’m Famous due out in July of 2022. “Helpless” is the second single of the album’s release off the forthcoming album.

“Helpless” is a very simple song musically. It’s literally two chords. But within those two chords, there is a spiritual center to the song that I think will resonate with people,” Bhiman says, describing the song as “if Post Malone read Nietzsche”.

“First rate, folk-based and undeniably unique” according to the Washington Post, Bhi’s genius has always been catchy songs that pack a deeper punch and “Helpless” carries on that tradition, pulling listeners in with the first strum of the guitar and keeping them there with lyrics that are by turns profound, upbeat, and deeply human.

The new track drives home the fact that we’re living through a remarkably tough, but also contemplative time. And that to be human is to embrace both the profound and surreal, and above all to grab moments of joy where you find them and hold on.

Check out the visual for the profound track HERE:

Over the course of his career, the St. Louis native has collaborated with a diverse list of creatives including comedian/actor Keegan-Michael Key, author Dave Eggers, singer/songwriter Rhiannon Giddens, rapper/director Boots Riley, and late iconic singer Chris Cornell. Bhi has been called, “One of America’s best kept secrets” by The Times UK, and “first rate and undeniably unique” by the Washington Post. His music has been praised by the Wall Street Journal, NPR, Billboard and the New York Times.

“Helpless” is the second of three soul-stirring singles that come from Bhi’s most personal album to date. Co-produced by Sam Kassirer (who worked on Bhi’s acclaimed debut, BHIMAN), the album sports a world-weary, but wide-eyed positivity.