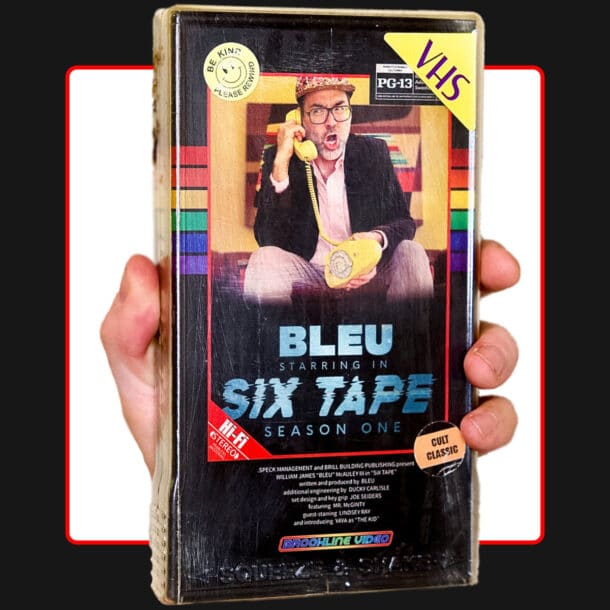 This new project shows off a more vulnerable side to Bleu. In “SiX TAPE”, he opens up about fatherhood, religion, and his experiences growing up, layered over a mostly upbeat soundtrack. Fully accepting who he is, the decorated artist is proud to release an honest record for fans and new listeners who are sick of sugar coating their truth.

SiX TAPE unabashedly plays like a well-worn 90’s cassette mixtape. Self-described as a purposeful “mish-mosh of styles” he writes songs for himself, fully-focused on what it is that will bring a smile to his face, and in return the faces of fans.

Mostly written before 2020, the album was originally meant to be a project of collaborations; however, due to the past few year’s events, “SiX TAPE” ended up becoming much more personal for Bleu. Fatherhood stepped in and forced a change of course toward an introspective journey leading up to the birth of his first child. And the variety of sounds that the album presents is not to be ignored. Having written for household names like Demi Lovato, the Jonas Brothers, Selena Gomez and several K-Pop idols, Bleu’s versatility shines as his songwriting and production skills keep listeners on their toes.

Once signed to Columbia Records, Bleu has released 5 studio albums, various cult side projects and now works directly with some of the biggest labels, film/TV studios and show runners in the industry. His music has been featured by networks and brands all over the world including eBay, Swarovski, Bose and hit shows like Shameless, The Good Place and Insecure. What’s even more impressive is that Bleu wrote and/or produced all of the songs for Disney’s “Legend of the Neverbeast” including a duet with Grammy-nominated KT Tunstall.

Most recently, Bleu signed on to score his very first HBO docu-series and we can look forward to collaborations with Island Records’ OWENN, Kate Pierson of the B-52’s and indie phenoms Lola Blanc, Gothic Tropic and Mike Taylor. If that weren’t enough, he’s nearly done authoring a master’s degree course in songwriting for Berklee College of Music that debuts this Fall.

I’m so excited we discovered this eclectic and prolific talent, and am in awe of all he has and is accomplishing. I hope you all love the album as much as we do here at WFNM.