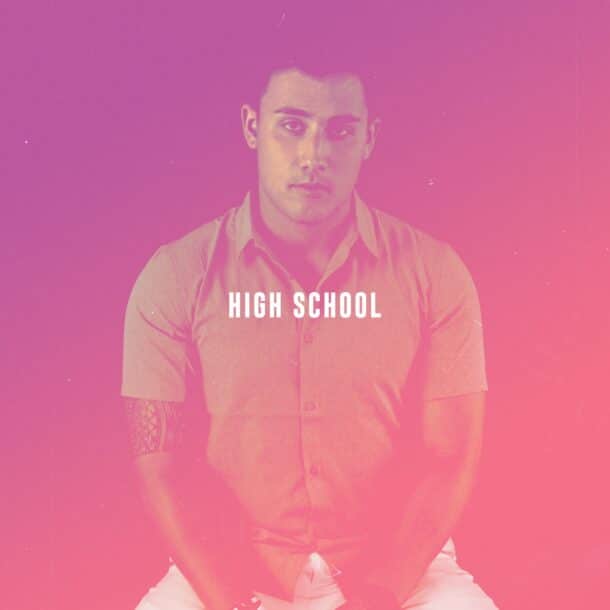 “High school” is a song that Bradley wrote reflecting upon his experiences as a closeted athlete going through high school. He had a really tough time growing up trying to balance the act he thought he needed to put on while simultaneously trying not to lose who he really was. He always thought that his reputation, his family’s reputation, his football/basketball/track team’s dynamic, and his friendships would be ruined if anyone knew the truth about him, so he shielded part of who he was from everyone.

Everyone on the outside probably has some sort of baseline idea of what people in the LGBTQ+ community go through in having to hide who they are, but it’s hard to fully understand how damaging/traumatizing it is unless you experience it for yourself. Bradley spent everyday of his childhood hating a part of who he was because society told him to. He is far removed from the place he grew up in but is still affected by the traumas of growing up closeted today.

The lyrics throughout “High School” portray the aforementioned inward struggle that Bradley experienced trying to fit in with the rest of his peers who went out to parties and hooked up with people that they were “supposed to” hook up with. It references all of the nights he spent laying in his bed feeling helpless and longing for the day that he could leave the nightmare in which he was living. The last line of the chorus directly addresses this idea of escaping from the mental prison that high school represented for him. Bradley’s verse and bridge coupled with Liam Hull’s verse which represents the “straight” side of who Bradley was in high school gives you the full range of emotions that Bradley and probably many other closeted youth experienced and continue to experience today.

The instrumental behind the lyrics has a melancholic but upbeat feel to it; it matches the tone that the lyrics set, but also provides a hopeful mood because it feels like the end of this torment could possibly be in sight with graduation. Going along with Kim’s guitar-driven songs, the song “High School” is sure to take you for an emotional ride.”