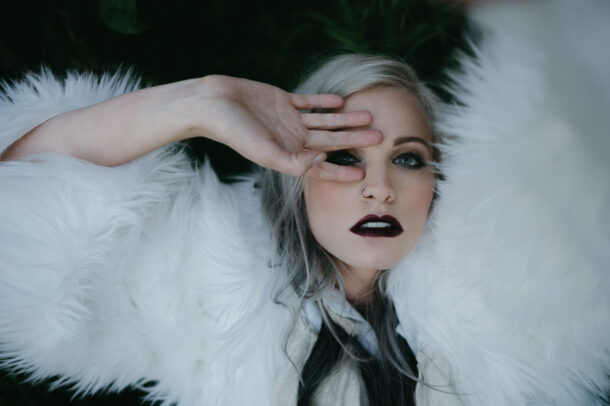 Making her 2022 return with a strong statement, Carmen Jane’s newest single is pure fury, one that’s been hardened and sharpened to its utmost, and it comes wrapped in the fearsome raiment of her iconic “Dark Pop” sound, perhaps more imposing and bolder than ever before, and If you know not of Carmen Jane, then it’s time you schooled yourself on the intense vocals and cutting-edge sound of this Pop vanguardist from Washington State.

Partnering with producer and songwriter Nico Rebscher, carmen strides the line between what is catchy and groovy and what is emotional and contemplative. While any given artist tends to fall into either category, Carmen defies what people have come to expect of pop, positioning herself at the forefront of the alt/indie “Dark Pop” movement alongside artists like Billie Eilish, Lorde, and Charli XCX. The two of them write music whose main purpose seems to be confronting deep- emotions and experiences often avoided or outright suppressed, and her newest single is exactly that.

“Blame You” is a complex song that faces off against anger and frustration, fully immersing itself in the language of these vitriolic emotions to get at the center of a mind in turmoil due to blame.

It’s “easy” to cast blame on someone else while absolving yourself, so much so that it’s kind of of a universally-experienced coping mechanism that many people don’t ever manage to escape, usually due to pride. Carmen’s take on the tumultuous and dangerous process of pointing fingers is to look through the rage.” It’s about allowing yourself to feel at the highest intensity knowing that you should eventually come off it & face the issue at hand. ” she says, taking the time to fully explore the venting process before ultimately accepting that it’s time to examine her actions and take full responsibility for her doings, leaving off with “oftentimes the finger should be pointed right back at ourselves.”

Jane’s live-wire cinematic sound reaches its full potential with or without visuals alike, but a music video never hurts, especially if it features the dedicated creative powerhouse of Factory Town, a Film company with whom C.J. has worked before (FUN, Numb). Who better to continue trusting your material with if not with previous collaborators who have grown to understand you? The strong neon-washed visuals employ some interpretative trickery to narrate the song’s themes about blame as a double-edged sword. “The video shows both sides. The struggle between oneself and the struggle between two humans who most certainly don’t always get it right.”  as Carmen puts it.

Wading through her social media and her videos, makes Carmen Jane’s traction feel a lot like a ticking time-bomb… in a good way. It feels like she’s about to blow up in a major way any second now, and perhaps this is the song that’ll do it.