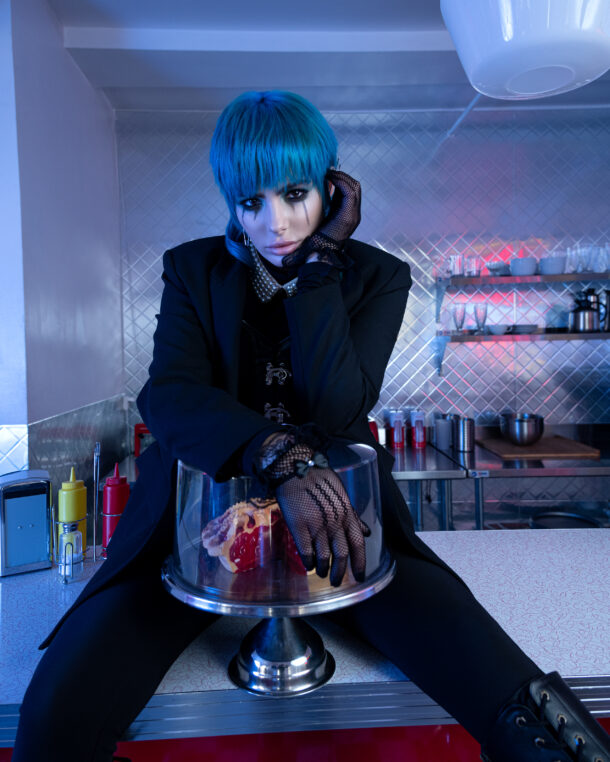 San Francisco Native and L.A.-Based singer and songwriter Courtney Paige Nelson sure turned a lot of heads when she finished 4th place during “America’s Next Top Model, Cycle 23”, but ever since then, she’s also been turning ears with her bold electro-pop sound and poetry-fueled songwriting.

With basically 0 formal training, Courtney Paige Nelson is as self-made as they come. Following her gut instincts and turning her life-long love of creating poetry into a blooming musical career that is already generating the kind of ominous ripples throughout the industry that lets you know you’re dealing with serious talent that will not be denied her rightful place amongst the luminaries of pop. Her music’s been covered by a score of prestigious online publications and DJ Trio “BROHUG” remixed her song “Saved Myself” into a #1 hit in Denmark.

Today we get to take a look at Courtney’s newest single, a darkly electro-pop banger by the name “Bury it”.

Some things are best left dead and buried in a deep hole, never to resurface again. It’s grim but that’s life. And this is especially true when that thing you want to bury is a negative state of affairs that’s draining the joy out of your life, sapping your energy, and making you numb.

This is a lesson that most people have to learn the hard way, and it’s a lesson that Courtney had to put music to in this new track, and in a way, therapeutically turn pain into progress and sour memories into wisdom. “I wrote this song to highlight the idea of toxicity in a relationship and how it affects two people.” Says Nelson. “Understanding someone is bad for you, but continuing to go back and forth when you know the best thing to do is to ‘Bury It’ altogether.”

The song kicks off with some nice and spacious guitar plucks that are absolutely reminiscent of the legendary  Roland jazz chorus 120 amp. The cold, nostalgic and bittersweet sound of the guitar stays with us throughout most of the track, even as it becomes steeped in the language of Trap music. These curious juxtapositions takes us in a very interesting emotional direction, as it’s clear that the process of burying “it” isn’t just a sad exposition of negative emotions, but a quest for the strength and the will to rise again after the fact; this is why there’s always this sort of underlying optimism with the way the guitar interacts with the beats.

As for the lyrics, Courtney takes well to the value of motif and repetition, with the very first thing we hear out of her lips being the title of the song itself. In her own words: “toxic relationships can make you “rot” from the inside out, till eventually, you’re just a zombie” that image of the living dead are fitting for someone who’s a self-described fan of Horror films, but they also represent the very real emotional state that one can be put through in these sort of relationships.

Courtney deftly took that image of the undead creature representing that harmful state of being and wove it directly into the narrative of the song, with verses such as “So check my wrist to feel a pulse//you fill my lungs until I choke.//Put down some flowers grave is full.//what’s dead is dead we’ve both gone cold”.

I think this kind of visceral metaphor has become a staple of Nelson’s songwriting, and it certainly makes for an impactful narrative that gives you a very clear image of the incredible potential that this amazing artist is so quickly developing. Her debut  EP “Fever Dream” was released on May 28th, 2021, and her second EP is set to drop sometime in the  Spring this year, so keep your ears perked up!