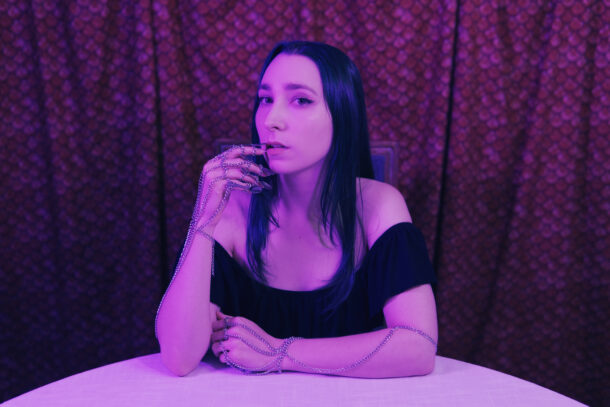 It’s little surprise that the music video for Elthia’s “little delights” is so evocative and rich. As a musical artist, Elthia is an avowed visual evoker: “I think of my songs as paintings that draw you in,” she says, and her songwriting is filled with the bardic wordplay and imagery that makes for great storytelling. Her newest single is called “little delights”, a song “about savoring those sweet, beautiful moments with your partner.”

With just two single releases under her belt, the L.A-based singer and songwriter has already managed to make a name for herself with millions of cross-platform streams and praise from a multitude of outlets. Her 2020 debut single, “i love you but you make me cry” went viral through TikTok almost overnight, revealing the huge potential within her for those paying attention

“little delights” is as indie-pop as indie-pop gets. The sound has a positive manic-pixie-dream quality to it that is easy to get into, while still having quite a trippy depth to it. It can be hard to pin-point, but there’s definitely more than a little psychedelic sound into the mix; that is not to say the song dwells in the abstract and vague, however, while the music might sound like something one of the fair folk might come up with if given access to modern software, the lyrics themselves are quite straightforward, conjuring up pastry analogies about delicious emotions and sweet sensations.

As a sophomore single, “little delights” sets out to build expectation and hype around its author. If her stream numbers are any indication, things are ramping up quite nicely early on, shaping Elthia into a true one-to-watch developing artist whose depths we haven’t even begun to scratch.