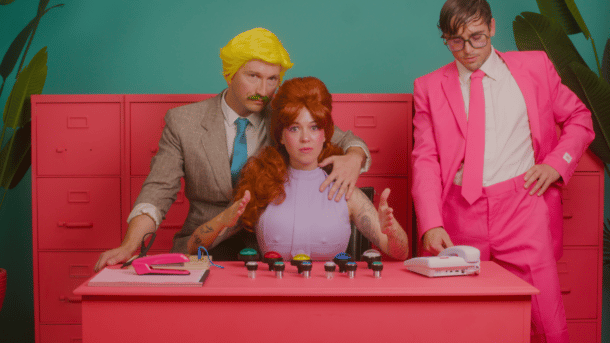 Elle PF asks “Can You show me?”

Very rarely do bands “Remake” a song of theirs, and when they do, it’s always a song that means a lot to them, a very special track that says something important about their story or holds a deeper significance to its members that only they could explicitly tell you about.

It’s easy to see why Elle PF, decided to re-make “Can You Show Me?”. it was the very first single written by original members Ranelle Labiche, Jenessa LaSota, and Katharine Seggerman.

Lead singer/songwriter Ranelle Labiche recounts one such (awful) experience: “One time a door person at a venue stopped me while I was carrying in my gear to the show and said “Sorry, groupies don’t get in for free,” and he wouldn’t let me in until my bandmates (all male at the time) vouched for me that I was actually in the band” – I’m sure this experience must have been frustrating and demoralizing at the time, but being able to see where she is now, I can’t help but laugh at how shortsighted and ridiculously presumptuous this bouncer guy was.

Once underestimated, condescended to, and even berated, the band channeled all of these exasperating experiences into a rather sarcastic retort, not “reclaim” anything, but rather to assert their power, competence, and sense of belonging, turning sour industry challenges into kinda hilarious memories that fuel the fire of their dedication to their artistic work. Compound that on top of the extremely cool fusion/prog-rock solo and you got yourself a serious statement about the Band’s diversity and quality.

To celebrate this re-make, Elle PF decided to go all out with a spanking new music video that makes the hindsight of the song even funnier, and I’m not just saying that I laughed out loud watching the visual gags in the video. Just about every colorful shot’s packed with little details that make the video just absolutely hilarious. Huge props to the director, Danin Jacquay (Deathcats), and everyone involved for “understanding the assignment” as they say.