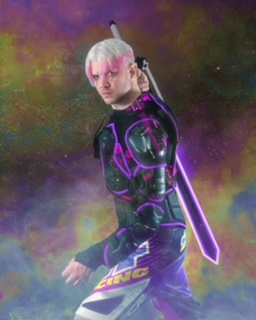 GLASS BATTLES RETURNS WITH A VENGEANCE AND DEBUT SINGLE FROM HIS SOPHOMORE ALBUM, “NIGHTS IN CYBERIA”

After a year that has been fueled with peril and uncertainty, Los Angeles solo outfit, Glass Battles, returns to the music scene with his ferocious and forward-thinking track, ‘Violeta!’. The first single off of his anticipated sophomore album, “Nights In Cyberia”, he re-enters the alternative sonic-sphere with an industrial pop record that begins with a belying vintage orchestral intro and is immediately slammed into a razor-sharp synth line that leads the path through his heaviest and dramatic track to date. The subdued, breathy vocals of the verses over a bed of static and thumping kick drums hearken back to grunge and industrial icons like The Deftones, Garbage and Nine Inch Nails. as he defiantly coos

“I’m so sick of damn Los Angeles, but maybe I’m not”

followed by an arpeggiated pre-chorus that shifts into a melodic, nearly dark Robyn-esque lead into the goth, operatic chorus. Layered stacks of harmonies punch through a wall-of-sound chorus, complete with unsettling synths and an orchestral synth so haunting it almost seems out of place in a modern pop song. The bridge on its own would make a complex journey, pairing clips from a dated and topically haunting tutorial on romance from the 1950s, with a layered whisper before launching into the post-apocalyptic gallop into the last chorus. We’ve all been through a lot in this recent year and onward, but if this is any indication of what’s to come from Glass Battles, we are gearing and ready for the apocalypse.

WE FOUND NEW MUSIC presents Glass Battles on October 28th at Bar Lubitsch, for a free full evening of music curated by Sean of Glass Battles. RSVP TO ATTEND