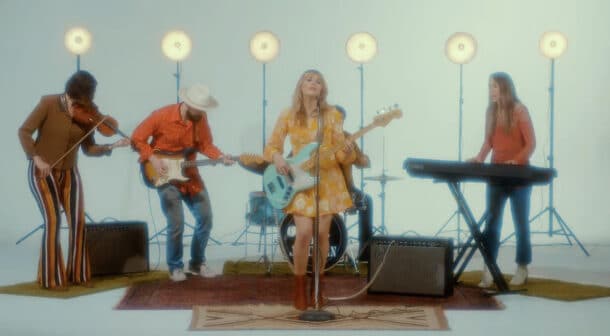 Indie pop meets folk rock artist Haley Johnsen has just unveiled her latest single and accompanying visuals. The track “Common Ground” was born out of the artist’s own feelings of frustration with the current state of politics in 2020 and the division it brought among us Americans.

The nostalgic visuals reminiscent of the 1960s show a time prior to smartphones “but when society was still divided and people had their eyes glued to the tv. In the video, my at home character is experiencing adversity with someone in her life and herself,” confides Johnsen. Musically, “Common Ground” enchants with soaring strings, cashmere-laced vocals and deep basslines. Haley Johnsen has an uncanny ability to fuse pop, rock, Americana and folk for a refreshing sonic hybrid.

Haley Johnsen is a Portland based musician, singer and songwriter. “Common Ground” is the third single off of her fourth studio album due later this summer.