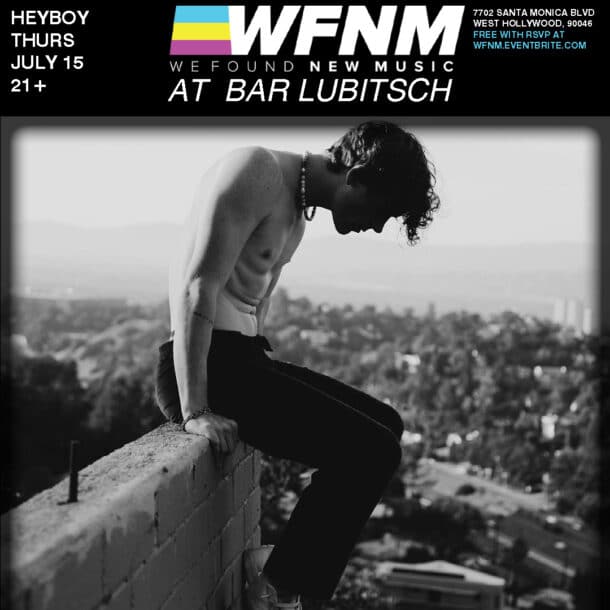 Heyboy is a 24 year-old Los Angeles based artist who makes sweet and catchy pop songs. Originally hailing from a small town outside of Tulsa, Oklahoma, Heyboy grew up singing and performing in megachurches, initially learning the piano which he hated (his mom made him do it) and eventually teaching himself the guitar.

Because of his time in the church, Heyboy grew up exposed to a lot of gospel music which introduced him to the concept of music as a deeply personal and emotional experience. However, his home wasn’t all church music. From his dad, he developed a love of Elton John.

When he did begin to discover pop music, it was the Jonas Brothers and it was through them that Heyboy found his way to songwriting.

According to Heyboy, he began writing songs at the age of 11.

But it wasn’t until high school that he really discovered pop music and cited artists like John Mayer and Ryan Tedder as favorites and influences on his music.

It was while he attended college at Oral Roberts University that Heyboy really began to look up to Tedder who is an alumnus of the university and would often DM him on Instagram for advice.

He also cited Coldplay as a major influence.

While traveling in Europe, he got the opportunity to attend his first real concert, Coldplay at Wembley Stadium in London.

Despite his exposure to music in church, Heyboy’s experience with music had always been a deeply personal and solo experience and he was unaware that others were capable others of similar intense emotional reactions.

Until he saw Coldplay.

When the band performed “Fix You,” he noticed a man next to him smoking a joint and “bawling his eyes out in the most meaningful, honest, authentic way.”

“I was looking around at everyone else around me and I was like, ‘This music affecting them the same way that it affects me.’ I thought I was alone in this little emotional encounter. I thought it was almost like my little secret. And I found out, it was like, ‘Oh my gosh, this has impact. Not just to me, but anywhere else around the world. This music is life changing,’” Heyboy said.

“I left that show, and in that moment, I was like, ‘There’s nothing that I could do on this Earth that is more fulfilling and meaningful to me than that.” That is the perfect picture of passion meets purpose,” he said.

Influences like Coldplay and John Mayer are evident in Heyboy’s melodic, wistful pop.

His newest track “Wasn’t It Fun?” is by far his best track and feels bigger and more cinematic than his previous work. Produced by Sam Gildes and Les Priest of LANY, the track had Heyboy’s signature self-reflective quality but is more upbeat than the majority of his previous work.

The production is lush and varied and gives the track a more sophisticated and polished sound.

Heyboy said that he wrote the track about falling in love with a close friend and maintaining a positive outlook on the situation even though it ended.

“And I wanted to write a song about the positive outlook of viewing a past relationship, because it’s so often, I think, to end a relationship with someone and think to yourself, ‘I was terrible. That person’s terrible. I never want to speak about them again.’ That’s so commonly our experience,” Heyboy said.

“But I want to see this person as, ‘Maybe this is not my person, but that was fun. They added value to my life, and I grew, and I learned and, more than anything, it was fun falling in love. Despite all the highs, despite all the lows, in the midst of all of it, it was fun,’” he said.

Up next for Heyboy is EP number two which promises to be deeply personal, introspective and vulnerable.

“It’s just real, authentic honesty and these songs are going to … it hurts to put out, a little bit. I’m scared to put these songs out. Honestly, I’m terrified. But I think we go through things in life so that we can talk about them and share them with other people, because when I went through these things, I felt alone and that sucked. And music was that really cool thing that made me not feel alone, so I feel like … I just want to talk about it. I want to be bold and that’s the only way I can heal from the things that I’ve gone through, is to talk about them. I’d say some songs on this next EP are super vulnerable that I’m so excited about,” Heyboy said.

Be sure to stream “Wasn’t It Fun?” out now on all platforms.

Also check out Heyboy in interview with Grant Owens, in preparation for his Live debut this week at Bar Lubitsch!