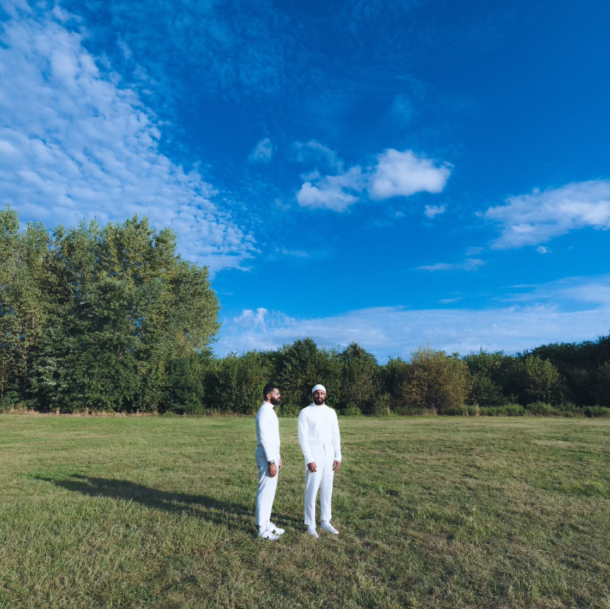 Indie / Alternative band HOAX released b? – the long-awaited narrative-driven debut concept album and a 17-track project detailing the inner workings of being vs. doing. STREAM NOW

The entirety of the album is best characterized by its title track, “b?”, which happens to also be the exact center point as well. The whole idea of transitioning from a DO-er to a BE-er is embodied by the themes focused around the idea of BEING. The narrative told isn’t meant to be esoteric or grand; instead, it is just a simple truth boiled down to a quiet realization:

HOAX’s debut album, b?, is a concept album that follows the narratives of characters that are thrown together in the aftermath of tragedy. Each song is written from the point of view of a character who explores the abstract concepts of the essence of “BEING”. The dichotomy of BEING vs. DOING is highlighted through careful lyricism on the album. Visit hoax-band.com for HOAX’s supplementary album content for their debut album, b?

Here is what the frontman Michael Raj had to say about the concept behind b?

“Behind all the facades we put up, under all the masks we wear – there we are: Ourselves in Being form. It used to be very hard for me to explain what it meant ‘to be’ to other people. And believe me – I know I am not original in this line of questioning. For God’s sake, we all know what Shakespeare said through Hamlet, but as the album developed, it became clear to me that ‘being’ is synonymous with ‘peace’. And that peace looks different in everyone’s mirror. It starts with self-reflection, and never ends with anything other than life devotion to your truest form. I’ve said it so many times throughout our career, but if there is anything you take away from listening to HOAX and this album, it’s to please prioritize your peace. We are only here for a moment in the blip of infinity, and during that blink, our peace and being will always be under the scrutiny of the randomness and chaos of life. Perfect the art of sitting still, to know yourself, show and embody empathy, and be authentic to your peace.”

I’m honored to go through this profound record with song by song commentary, as HOAX is of one of our favorites here at WFNM.

Trees is the first song of the explorative musical journey that is b?, and it immediately pulls you in with it’s whimsical soundscapes and meaningful lyrics, belted through the powerful vocals of Michael Raj. Raj says this song was inspired from one of his favorite books One Hundred Years of Solitude, and is about questioning the meaning of life and existence.

could is a song that really helps you get to know HOAX’s distinct sonic identity, and profundity that is so rare in music these days. This song depicts the endless opportunity in choice, the power that all humans are gifted with in every moment that shapes our lives. You can hear the soul in the vocals in this one, Raj is clearly a deep thinker and cares a lot about life and sharing his thoughts through his unique perspective and musical gifts.

soju is a bouncey, jazzy, upbeat tune that breaks up the heaviness of life’s most important questions that are hidden in the soundscapes of this album. This song was written after a season of death and grieving, one of the most difficult things to face in life. I love how ironically cheerful the song sounds knowing this backstory, as finding love and someone you can give your all to is the takeaway Raj shares in this song, after this challenging moment in his life, and a moment we will all inevitably face in our own human experience.

“Wasting Time is not some epiphany to carpe diem. It is just understanding that time moves one way always: forward. And as far as I know, every single one of us is finite, and wasting away. So if you are going to waste away, you might as well find some people to waste away with.”

Formulate opens with a walking-pace bass line, and opens up to a groovy distorted 70s dance floor track, and explores divine connection and draws a line between similarities of all religions, and urges listeners to accept life as it is, and to accept themselves.

“Priorities change but people never do, and I would be a fool to think you’re worth it to lose”. Much like the heart of its predecessor, “Beach House ii” deals with the same sentimental feelings of uncertainty amidst unwavering love and desire, while trying to work through it – just as we all are. – Michael Raj

This song was written in 2020, and was a year of introspection and reflection, like it was for a lot of us. This album sounds like it feels: asking and pondering life’s most important questions.

drew picks up the pace. Makes you want to throw on some rollerblades and get outside in the sun.

The title track of the album and the exact center point. The whole idea of transitioning from a DO-er to a BE-er is embodied by the positioning of this track. If the first seven songs are the exposition and rising action, “b?” is the climax. It’s the epiphany – but it isn’t meant to be esoteric or grand; instead, it is just a simple truth boiled down to a quiet realization:
“Honestly, this life moves like a daydream, caught between how the way it goes ain’t always the way it seems. So lovely, cut right through all the ugly feelings faced, cause the way they are ain’t always the way we should be.”

5, one of my favorite songs on the record, feels like the turning point of the record, both sonically and conceptually. Raj’s voice even gets more legato and dreamy, as if he’s broken through some choppy energy and rough waters in circumstances in his life and human experience. This song is about the 5 stages of grief.

“goldeneyes” was written in two parts: identification and realization. The identification that the realest things that will lead to our happiness do not exist in the physical sphere, but are rather when we deepen our connections with love, trust, and empathy. The realization comes from the understanding that by looking through this new lens (of love, trust, and empathy), we can now focus on passion (the last things that we think about at night), as those are oftentimes our instinctual feelings of happiness.

The B section of this song is especially a dreamy treat.

This song examines the feeling of loneliness without the urge to leave it or try to make the feeling stop — just be and accept another part of human experience.

This song is a unique opening, with AI samples of what sounds like a wake up call from a close friend, or inner voice.

The band has written a manifesto about this record and invites you to read it HERE.

“When we outlined the album, Frantz and I sat down to write a manifesto that we would live in for the 4 years it took to create this album. Dramatically, we locked ourselves in an office and vowed to not leave ‘til we finished writing, but since we exist in the 21st century, we got distracted and watched the entirety of Donald Glover’s Guava Island. Then, we finished the manifesto at around 3AM.”

“unconditional” explores the transition that must indefinitely take place in order to truly give yourself over in any kind of relationship. It is not so much having blind faith. Rather, it’s more so a careful observation of the deeper understanding on why we see a person for their flaws or imperfections in the first place. We can’t turn our brains off, and to preach a blanketed statement of “Love and Acceptance” revels somewhere between naivety and idealism. But the point is to love others for their being, because that’s who they are, unconditionally.

This one is a love song ballad you can hear playing at your wedding. It has an old school vintage vibe to it, an aspect of HOAX’s music I’ve always loved. more than you know is about love and the different variations of it in today’s world, comparing modern dating apps and today’s love culture to the arranged 25+ year marriage of his parents’.

unamerican dream, another favorite of mine, opens with dreamy synth lines that make you bop your head and smile. This track depicts how far off we’ve gotten from the original American Dream, and the challenge of the game that is “work-life” balance.

As the record turns a corner towards its completion, you get to know the group a little better and undeniably hear the roots and beliefs of its constituents. Raj comes from an Eastern background, and calls out the other side of the spectrum’s strange approach from lifestyle, medical treatments to coping mechanisms.

“This song was written about our existential expectations that ‘Western Medicine’ claims to liberate us when really, they are more like miracle snake oils than healthy lifestyles.”

lily’s dream is the final song of the record, and is a lullaby and a gift from HOAX to you, the listener. This song examines feelings of comparison, and the emotional spectrum, but then reminds us to just be, to just bloom.

‘A flower does not think of competing to the flower next to it. It just blooms.‘ (Zen Shin) If you get anything out of this whole entire album, I hope it is the courage to just bloom, to just be, and that peace finds you well. Best of luck.