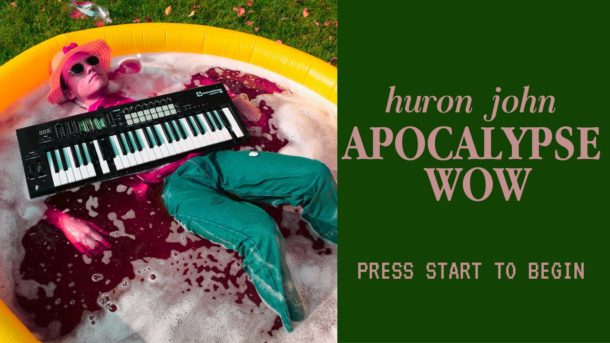 As we prepare to usher in the next decade and descend into the digitized ‘20s era, there is a certain artistic buzz in the air. The 1920s carved out its own very distinct place in the history of art. A time of liberation, invention, and creative freedom, one might draw some comparisons to what art might become in the 2020s. Yet, the artists of today have a tool that the creative minds of the 1920s could only dream of (or more accurately at times fear)– that is of course, the internet. A prevalent and pinnacle force in art today, the internet not only serves as a place to promote and exploit, but to connect and inspire beyond our wildest imaginations. It’s these new levels of access that has inspired some of today’s artists to express themselves with unprecedented self-mastery.

One such artist is 20-year old songwriter, producer, instrumentalist, vocalist, engineer, and visual artist, Huron John. As his impressive assortment of expertises portray, Huron John is an artist of many shades and hues. Dedicated to the DIY method which brought the world his collection of dreamy, nostalgia-laden 2019 singles such as “Friendzone” and most recent release “Seafoam,” he has remained stalwart in his preference for a “personal product output” to his audience.

As difficult as it can be for any new kid on the block to build momentum in today’s noisy industry, Huron John’s releases have been well received by his growing fan base, amassing several million streams worldwide and landing spots on coveted Spotify playlists such as New Music Friday and Bedroom Pop. All of this momentum has led to this shimmering moment in time, the release of spectacular creative short and the announcement of Huron John’s debut long-form project, Apocalypse WOW.

Conceptual through & through, the video follows a fantasy video game format, beginning with an “on-the-nose” disclaimer explaining a very “off the nose” concept, “A new gaming experience designed to replicate the world of Huron John.” Capturing the viewers attention from the get go, Huron John begins to tease various tracks off Apocalypse WOW in psychedelic fashion. From a spacey shots of a jarring make out scene to animated images of singing hot dogs, it’s fairly apparent that Huron John’s world is much much more interesting than our own. As enticing as the colorful visual is, the sonorities that accompany it are equally as awe-striking. The four tracks teased on the video feature snippets of addictive melodies and intriguing sounds, leaving the listener salivating and hungry for more of this quirky sonic delicacy.

Stay ravenous for just a little longer boys and girls, as Apocalypse WOW will be gracing our ears, minds, and hearts come 2020!