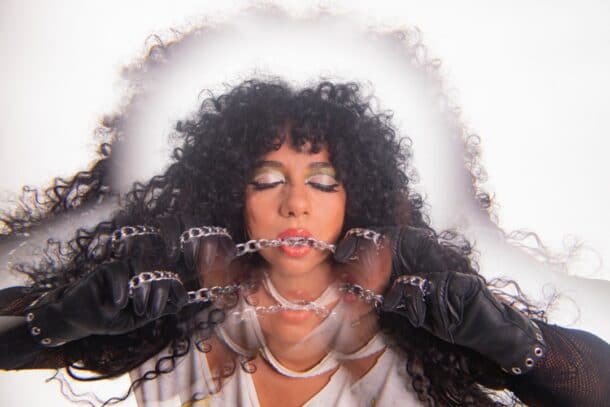 Big hair is a big mood, and Jen Awad’s voice (and poise) is one too. The Peruvian-Egyptian goddess rocks her black catsuit and black curls in a shift from her usual soulful pop sound to bring us her most visceral and powerful single yet.

Teaming up with songwriter and producer Morrison Conroy, Jen had decided to “hang up [her] retro-soul hat and take a shot at a country song”. In the process, the two of them “drank whisky and wore cowboy hats to get in the mode at his Venice studio in a pre-covid world. ” The end result is a legit country song with a rock & roll kick that turns heartbreak on its head.

“Fallin For Me” deals with perhaps the worst kind of heartbreak, one that comes from calculated deceit, and it’s based on a real-life debacle that Jen had in falling for a “con artist social climber” who basically gaslit her and manipulated her feelings for his own selfish ends. The song then isn’t just cathartic, the way Jen seems to be reclaiming something out of the wreckage of that toxic experience, a combination of confidence, dignity, or just plain power that she then uses to fuel her passion.

The music video was directed by Mynxii White, and it’s shot in (where else?) the dessert. A staunch defender of all things Retro, Jen’s newest video can only be described as a classical Americana potpourri of visual references harkening back to old exploitation films. This  I figured leans on the Rock aspects more so than the Country music side, as It didn’t take long for me to notice Jen was channeling “Tura Satana in Faster, Pussycat! Kill! Kill!” during the day scenes, while at night she seemed to transform Auntie Entity (Tina Turner) from “Beyond Thunderdome” with some bizarre magical powers thrown into the mix, because why not.

With such a powerful and soulful voice, and the strong presence she brings when emoting her vocals, I think Jen can easily turn to any musical genre she desires with ease, and although I’ve been hearing her for quite some time, I think i completely felt for this new grittier version of her sound.