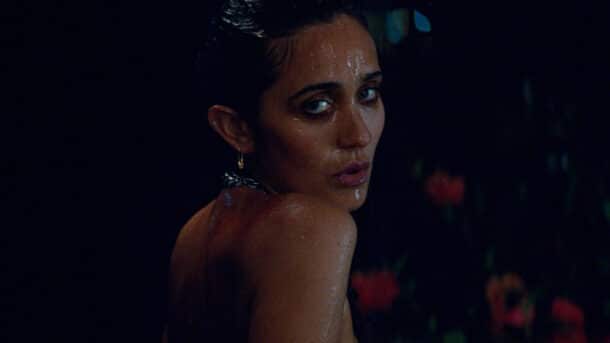 Jesse Jo Stark is “So Bad”

Jesse Jo Stark is a hypnotic artist. Looking at her is  getting carried away by her incredible deep green eyes, and listening to her is a very cerebral experience inspiring feelings of nostalgia, melancholy and Old Hollywood glamor.

She has just released a new single and video called “So Bad”. A very intense track with the razor-sharp seductive aesthetic that became the songstress’ calling card. This new piece of audiovisual madness pays homage to the same hyper violent B-series revenge flicks that inspired so much of Quentin Tarantino’s signature style. The video features family and friends in various roles, and some of this faces will likely be more than a little familiar to some of you. It was directed by Ramez Silyan (Everybody’s Everything) and it ends with an ominous message… “Eye for an eye / Dead even.” A phrase that could just be a cool cryptic thing or it could potentially unveil a little more of Jesse’s upcoming project: Her upcoming debut full-length album, “DOOMED”, out September 21st.

Now’s a very exciting time to be a Jesse Jo Stark fan (and that we are), but if this is your introduction to L.A.’s Deadly doll, let’s give you a quick rundown:

Stark’s life has been delineated by a dynastic creative heritage, because just before she was born, her parents had started to build their family business: “Chrome Hearts”, the luxury accessories and lifestyle label favored by the likes of Jay-Z, Drake, Bella Hadid and Jesse Jo’s godmother, Cher. Yes, as you just read it, Cher is her godmother.

Born and raised amidst huge creative forces in L.A. it’s no surprise that Jesse would write her very first song at age 7, going on to form her first band just 4 years later. Clearly she hasn’t stopped working hard and growing into a vocal and song-writing powerhouse, only she’s draped in the cobwebs of Old-timey hollywood horror and suspense, delivering an addictive rock and dark-americana blend with every mind blowing release.

In a recent interview Jesse said how it was for her growing up in the middle of a nomadic tradition. “It gave me such an appreciation for the world. And I love touring as a musician. You know, being on the bus, squeezing into the tight spaces,” she shares. “But at the same time, being grounded is so important to me. Even when I’m in a hotel room for a day, I have my blanket, my crystals, my little monster puppet. I’m always telling the boys in my band, ‘We need to go and stick our feet in the grass!’ They tell me I’m so weird for saying that, but I grew up by the beach and just want to feel rooted, no matter where I am.”