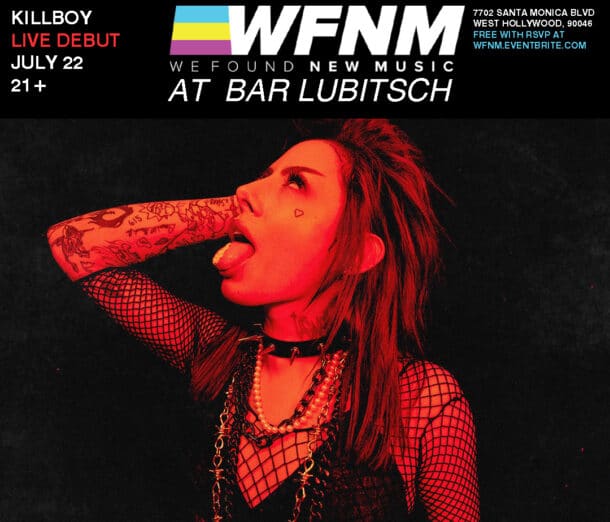 KILLBOY is a force to be reckoned with. From her purple mullet to her in your face alt-pop bangers like “U + ME” to her larger than life, magnetic personality, KILLBOY will draw you in, make you love her, make you hate her, write a song about the whole thing then send that song to you. This is an established pattern of behavior with her.

“All my shit’s about real people in LA that fucking hate me, 100%. I typically just send it to them,” KILLBOY said of her songs.

Originally from Texarkana, Texas, KILLBOY grew up in a strict religious household and was always writing and singing songs from “since when I was in a car seat.” She grew up listening to Britney Spears and My Chemical Romance before finding her brother’s CD collection where she discovered Korn, Limp Bizkit and Green Day. Growing up around a piano, she can’t remember a time when she wasn’t playing and began playing the guitar in the fourth grade. When she was in eighth or ninth grade, KILLBOY wrote a song for her first boyfriend, Jared who subsequently played it for his entire school. Looking back at it now, she can laugh about it and it certainly didn’t deter her from writing songs and giving them to boys.

Her latest single, “CORY WIT THA GF” is one such example. According to KILLBOY, the real Cory and his girlfriend were extremely pissed off for a while about the song which details KILLBOY and Cory’s feelings for each other. KILLBOY said that Cory’s initial anger has since subsided but that he completely stopped talking to her for a while. Co-produced by her and Nightmare, the track has lush production and dreamy and layered vocals. The song is KILLBOY’s most mellow track to date and has a much sweeter pop sound to it than her previous work while still retaining the signature KILLBOY attitude. A simple strumming guitar and beat add to the stripped down purity of the track.

Her best track is “U + ME” an alt-pop banger that is an anthem for all those relationships that are incredibly hot but also incredibly toxic and can never last. Written about a girl she dated for about a week and described as “all emotional and needy,” the track has a super danceable beat is infectiously catchy and has an infinitely hummable melody. All in all, it is an intelligently crafted track that was produced by KILLBOY along with Johnny Goldstein. The track is a prime example of the raw lyrical honesty that you’ll find running throughout the entirety of her work.

When asked why this honesty was at the forefront of her writing, KILLBOY responded

“Because it feels gross if I don’t. That’s all. It feels like I’m trying to be something I’m not or something. I’m not a poet. I’m just a gal with a guitar.”