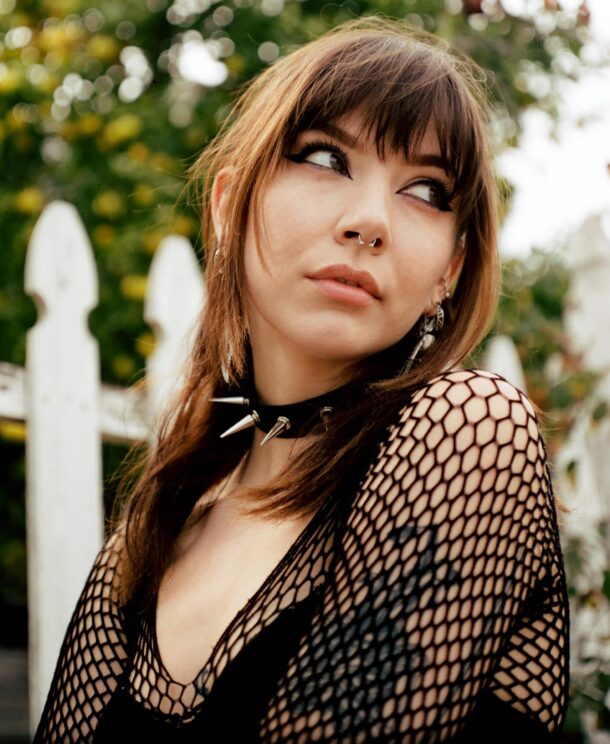 We are so thrilled to have KING MALA on our concert showcase lineup this Thursday night in LA at Bar Lubitsch.  KiNG MALA is an alternative soul artist based in Los Angeles. AKA Areli Castro, the El Paso born musician pens songs which touch on themes from lust, sexuality and badass femininity. Not afraid to spill her guts, the songwriter set out with the hopes to spark confidence in both herself and her listeners, creating music that will make you walk taller and speak louder. Both her music and visuals experiment with mascualine tropes, sharing “There’s something about taking something traditionally masculine and wearing it as a woman that makes me feel really powerful.” These masculine threads weave throughout everything she does, hence King rather than Queen and “MALA” which roughly translates to “bad bitch” in Spanish. Sharing her feelings from the bottom of her heart KiNG MALA encourages you to dig deep and connect with your inner-self. Life is messy and we shouldn’t feel ashamed to show our emotions and speak our mind.

“Golden Retriever Boy” is about discovering a side to someone that you didn’t see coming. Castro explains, “It’s about the sweet boy turning out to be the villain. It’s about betrayal and watching someone fall from the pedestal you put them on. It’s also about fuck boys… fuck fuck boys.” Featuring a throbbing bassline, animated synths and tongue-in-cheek lyrics, Castro sings “go be a puppy for someone else,” waving goodbye and walking away with a bold and brazen delivery. In true KiNG MALA style, this track packs a punch with it’s subtly menacing feel and candid lyrics. “Golden Retriever Boy” will be released alongside a music video made in partnership with Samsung and Springhill Productions.