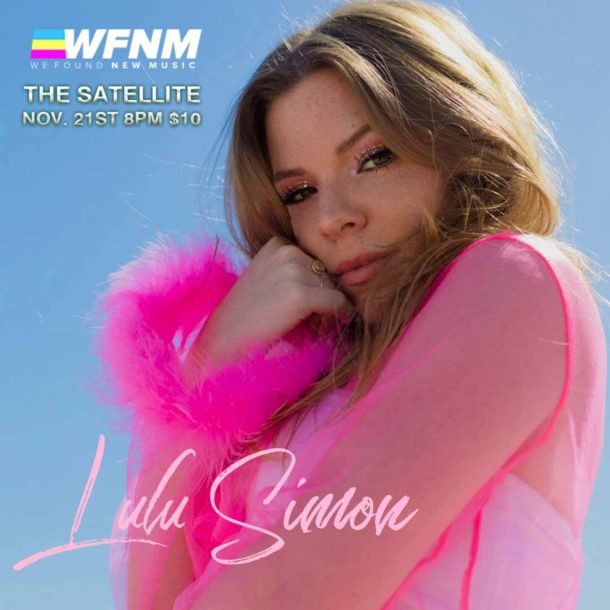 Many would attest that the intricacies of Lulu Simon’s DNA are most certainly lined with a combination of melody, heartfelt poetry, and sparkles. Practically exiting the womb singing an original tune, Lulu grew up amongst an extremely musical family. Her father, Paul Simon (of Simon & Garfunkel) and mother, singer-songwriter Edie Brickell, raised their children to live and breath music. Lulu recalls galavanting as a child through Central Park with her family, spinning up new tunes together, which silently reinforced confidence in her abilities to write on her own.

Early piano lessons led to Lulu teaching herself to play the guitar, which transitioned into writing solo introspective tunes, strummed softly, in private. Not quite ready to share her music with her family (understandable, considering) she began singing open mic nights, focusing on an acoustic singer-songwriter set. An encounter with Carly Rae Jepson’s 2012 album Kiss sparked a new love affair with pop music, so Lulu traded her gentle guitar chords for shimmering 80s synths, metamorphosing into the artist she was always destined to be.

Lulu Simon finds her stride in the juxtaposition of moods. Her self-entitled debut release (Aug., 2019) houses six tantalizing tracks, all of which explore a range of heartbreaking emotions involved in the conclusion of a romance. Yet these painful topics are combined with upbeat, dance-worthy melodies reminiscent of ABBA and Cyndi Lauper, which bring forth an overwhelming sense of hope amidst hardship. Lulu credits a lot of realizing her artistic vision to her producer Andy Selzer, who has worked with an impressive cadre of other alt. female pop standouts such as Maggie Rogers and Chelsea Cutler. Lulu shared with People that Selzer gave her “more confidence in my acoustic songs and their malleability — that they can be pop songs even though that’s not the way I heard them at first, but they can still maintain that singer-songwriter integrity and vulnerability.”

It’s that exact vulnerability which sets Lulu apart from other artists in her vein. A songwriter by nature and nurture, the integrity of her lyricism rings through because they are often based on personal experiences. For instance, leading single “Wasted” is based on her own relationship that went south. Furthermore, part of the motivation for writing and releasing that particular track was to tell that exact person how he made her feel and remind him of where she is now. In an interview with CelebMix she elaborated on this stating bluntly, “To be honest, I wrote it about some who really hurt my feelings and I wanted him to know it.”

Though based on real heartbreak, the song is far from morose. Shimmering textures combined with lively synthesizers transport the listener to Lulu’s dimension. The visual companion mirrors this energy, self-described as “cheeky & fun,” the video follows the storyline of Lulu’s heartbreak, moving into a party sequence during which Lulu dances through her pain landing smack dab on the other side and her ex… well, smack dab in the pool.

A fresh face on the live performance circuit, Lulu has been performing at local venues fine-tuning her live chops, leading up to the moment we’ve all been waiting for. You guess right boys and girls! Lulu Simon herself will grace the We Found New Music stage for the first time at a specially curated showcase at the Satellite on November 21st. Be first on Lulu Simon and purchase your tickets HERE, you won’t regret it.