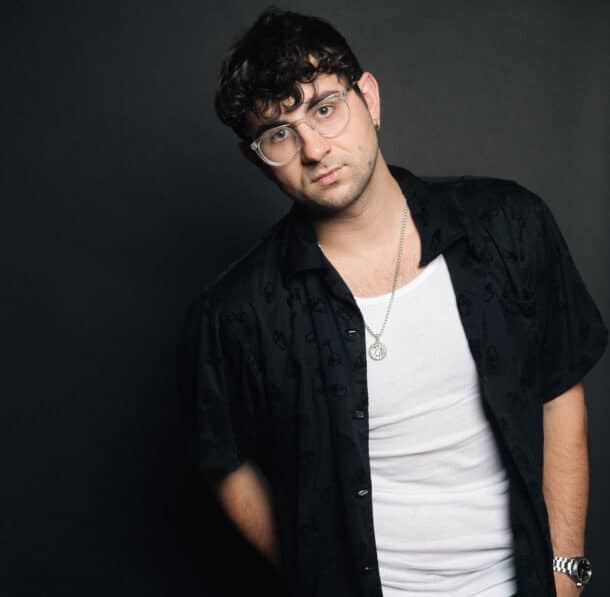 Mikey Ferrari is going to take you to the far abysses of outer space and the dark crevasses of his soul with his debut EP “SPACEBOY.” The six track EP runs the gambit of musical styles from electronica to alt-pop to indie rock to folk all while feeling cohesive with a singular viewpoint. Ultimately, what Ferrari does best is telling stories; stories that capture the listener and draw them into Ferrari’s world and leave them wondering what he’s going to say next. He’s a storyteller in the style of a James Taylor or a Billy Joel in that he paints a complete picture of a character and their struggles, often drawing on his own trials and tribulations for inspiration. Ferrari describes his own sound as “sad cowboy [music] that’s trying to look on the upside of things” and as “very introspective.”

Raised in the Bay Area, Ferrari moved to Montana as a teenager and it is Big Sky country that he truly considers home. It was while living in Montana and working with cattle that he discovered the guitar and songwriting.  He didn’t have access to the internet but had a few friends who played and taught him couple chords and his love for the instrument took off. Songwriting followed shortly afterwards, and he discovered his passion and purpose that has brought him through some of the darkest times in his life. In addition to guitar, Ferrari also plays the piano, bass and ukulele.

Growing up, Ferrari discovered classic rock and said he loves bands like The Eagles, The Rolling Stones, Jackson Browne, Pink Floyd, Elton John and The Grateful Dead (his mom is a huge Dead Head). He said his influences are The Beatles, Billy Joel, Still Woozy, JP Saxe, Elliot Smith, Tame Impala and John Mayer. In fact, it was a chance encounter with Mayer that helped Ferrari realize that music could be a career and not just a hobby.

When Ferrari was in college, he was playing an event that Mayer attended and was playing his original material when he got the proverbial thumbs up from the man himself.

“John Mayer went up to get a drink and he looked at me and gave me this nod. And a friend of mine who brought him told me after that he said really positive things about me. After that, I was like ‘Man, if my idol in his own way is approving of me and thinking that I’m enough in some sort then I have to do this for real.’ That was kind of the turning point where I gave everything towards music,” Ferrari said.

And we’re so glad he did.

In addition to writing for his own artist project, Ferrari often writes for other artists as well. He said he enjoys “finding female artists to write with. It’s kinda like the Jack Antonoff model, I want to work with people that don’t have a similar story to me and that I can push to bring out their story more because I love telling stories so much.”

Whether for himself or for another artist, Ferrari said he prefers to write about life experiences rather than drawing on his romantic life for inspiration. For example, “standoff,” the final track off the EP, is about losing a close friend to depression and advocating for yourself while dealing with mental health struggles. This is a task that Ferrari is intimately acquainted with having had his own struggles with mental illness since he was a teenager when he was diagnosed with Bipolar Disorder, and depression and anxiety are still something he battles daily. But with music, he’s found a way through his crucible and considers songwriting a form of therapy.

“I think what got me through a lot of my mental struggles was finding my passion and using that as a device and a force to get me through my struggles, that’s why I harp on it so much with music. To encourage people to find what they’re passionate about,” Ferrari said.

Depression, isolation and disconnection are all themes Ferrari explores on his debut EP, “SPACEBOY.” The EP has a little something for everyone no matter what your taste in music is from folk to pop to rock to electronica, and for an EP with such variety, “SPACEBOY” doesn’t feel schizophrenic or unfocused. It feels very much like the singular viewpoint of an artist with a lot to say who is trying to push the boundaries of his own creativity both from a songwriting and production standpoint. Produced and engineered by Adam Castillo of Armours, the full band sound fleshes out Ferrari’s vocals and adds to the cinematic quality of the EP. The production is exuberant, layered and adds a rich depth to the tracks.

The first track on the EP is also one of it’s strongest. “moving slow” is a pop-electronica banger about addressing the people who have judged you in past, including self-judgement and telling everyone, yourself included, to stop judging. Ferrari said he sees the track as a confidence song for the underdog. He said he envisioned the track as the song he wanted to listen to while running through the fog at 6 am while having a “Rocky” moment.

The track which has garnered the most attention is the cinematic alt pop single “lunar light.” Co-written with Tony Davia of Younger Hunger, “lunar light” feels big and aches with longing. Written about going to the ends of the Earth to fix a problem and making a living amends to people along the way instead of merely apologizing, the track is the moment on the EP where Ferrari gives his vocals a chance to shine. “wind blows” is slower, more laid back folk-inspired track with a haunting and catchy refrain and layered synths and the titular track “SPACEBOY” has more of an alt-rock Nine Inch Nails vibe to it.

The EP is the journey of the eponymous character which represents Ferrari as a teenager discovering he has the thick skin to be himself.

“So, I had no true sense of self when I was a kid and ‘SPACEBOY’ is the character longing to find himself and is always on that journey to find the next destination,” Ferrari.

Ultimately, Ferrari views the character as an outcast and explorer on a voyage of self-discovery.

Ferrari’s latest release, “Truth Is”, is a stripped back departure from the heavily produced “SPACEBOY.” The track has his signature storytelling, discussing the struggles of being at parties in LA where everyone talks a big game but where the truth might not measure up to the fanciful stories being told. The sound is simplistic with just a guitar, understated drums and Ferrari’s voice shining through, but the track feels big at the same time and represents a real progression in his songwriting.

Up next, Ferrari will be performing at the WFNM showcase at Bar Lubitsch on September 2. Be sure to catch his performance and keep an ear out as he continues to release new music. We can’t wait to see what comes next from this dynamic artist.