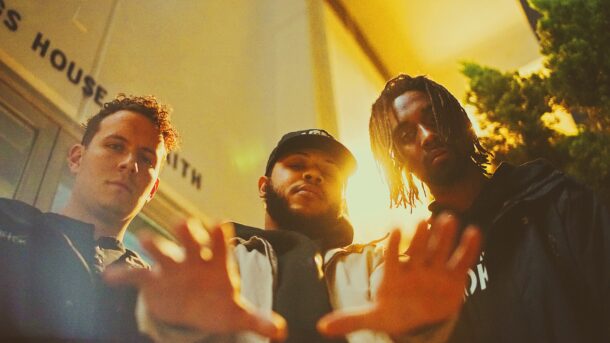 Consisting on an intro, interlude and outro in addition to two full songs, “Orange” is an expression of pent up rage and vitriol at an oppressive system. The interludes provide more melodic pauses between the more frenetic energy of “Embers” and “Patriot” and adds a sense of the cinematic the EP. Like a full story is being told.

The addition of Bedford compliments Frank Cornish’s voice adds depth and dimension to their sound.

Of the EP, drummer Tean Baker said “We want to do a really short release on something that was really compact. And put a lot into something small but we also wanted to be artistic and we wanted to do an EP in a different way. We didn’t want it to be long.”

“Nobody wants to listen to long shit if they don’t know who you are, unfortunately. There’s nothing against people who make long format music but you’re just starting out, especially if you are a Black artist, you better be hitting in the first 30 fucking seconds,” Cornish said.

“Embers” is a track with a classic punk sound and chest-pounding drums and where Cornish’s voice crackles with rage and urgency.

Of the track, Bedford said it’s about a variety of topics ranging from voter suppression to stolen data.

“It was just a collage of different topics and things we speak about when we’re creating music or in between watching sports or just sitting around shooting the shit,”

The other full track on the EP is “Patriot” which showcases Cornish’s hip hop roots and exhibits the band’s signature genre bending style.

Written in the wake of the January 6 Capitol riots, Bedford said of the track “that song was made because they took a shit in the Capitol and smeared it on the walls. That song was made because they put boots on Nancy Pelosi’s desk and laughed in our face as if there were no repercussions for it. It was a good emotional outlet for all the things I felt toward it and just letting everybody know you n-words are hoes.”

“Orange” is a great listen for when you feel like razing the system to the ground. Be sure to stream it now.