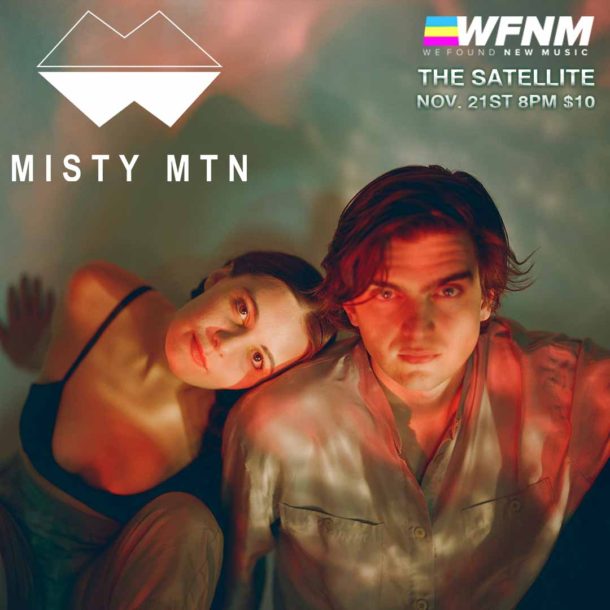 Purchase your tickets HERE to see MISTY MTN November 21st at The Satellite!

It’s a curious thought to look back on the series of serendipitous encounters that become the blueprint of our lives. With a casual “hello” and a blink of an eye, your life could be changed forever and the best part, it all unfolds in ignorant bliss. Couple Morissa Tunzo and Lucas Segall of “dark mountain pop” band Misty Mtn can attest to this lovely phenomenon. Having met working in a restaurant in Brooklyn, New York the duo traded dishes and trays for synths and guitars, quickly realizing the symbiotic sonic connection they possessed. Perhaps music led to romance or vice versa, regardless the pair embarked on their artistic journey together and at that moment, Misty Mtn was born.

Blending elements of folk with synth-pop, Misty Mtn released their debut EP Missed Your Call in 2019, just before moving their lives from city that never sleeps to the city of angels. A project dedicated to the colorful struggle of coming of age, each track touches on a different hue of this shared experience. Their most recent single “Running out of Patience,” the first of a forthcoming trilogy, shares that same youthful perspective but with a more mature understanding of the world around them.

Focusing on the inevitability of change and moving on, “Running out of Patience” presents a sort of lighthearted wisdom, welcoming the listener to dance through the struggle of transition. Musically, the track encompasses that same nature meets city feel, which has become their defining penchant, but with a healthy dose of pop palatability and ear worms. Led by a rhythmic guitar line and lyrics that describe a series of unfortunate “let downs,” the verses move fluidly into the ridiculously catchy pre and hook. But heed warning, if you choose to partake in this sonic pleasure you’ll likely be singing “I’m runnin’ runnin’ runnin’ out of patience” and the subsequent “ooh oohs” on repeat, all the way to your death bed.

Though a recorded treat for all those who indulge, the duo really found their stride through their incredible live performance chops. Opening for Rainbow Kitten Surprise in 2018, the pair stunned the crowd and quickly became a favorite in the New York indie-music scene. A taste from their NYC Sofar Sounds performance displays how well the recorded music translates to a live setting. Performing single “Guess Who’s Back,” the video showcases Tunzo’s lusciously emotive vocal and Segall’s backing harmonies and guitar stylings, creating a surprisingly large sound with only two participants.

Kicking yourself for missing these two performances? Take a sigh of relief because Misty Mtn is making their way to the Satelitte for a special We Found New Music show, amongst a lineup of other stellar performers. Purchase your tickets HERE before it’s too late!