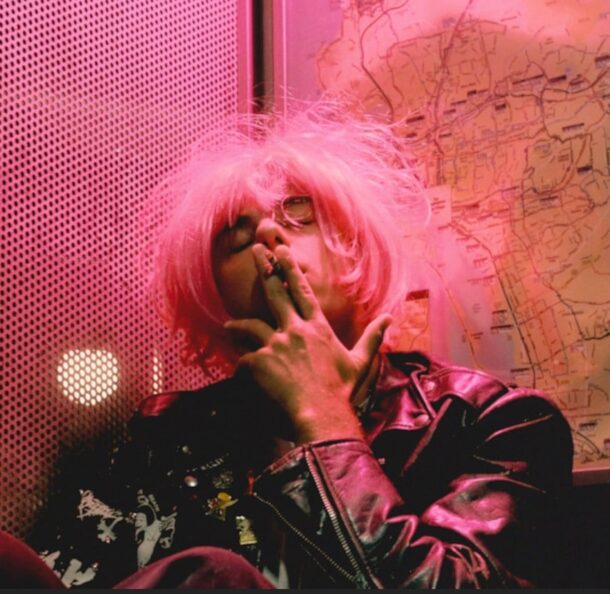 Slush Puppy is here to make you eat spit. And even though in the midst of a deadly pandemic, when the act of doing so could kill you, you’re gonna like it. “Eat Spit!” is the latest track from LA-based artist Slush Puppy along with WFNM fave Royal and the Serpent and is a raunchy, in your face banger that seems perfectly matched for the cultural zeitgeist of Hot Vax Summer. As evidenced by its success. The track already has a million streams on Spotify in its first week and is on track to do the same in its second.

He is an artist who can best be described as mercurial and unexpected. Slush Puppy initially started releasing tracks in 2019 like “Not Good at Being Bad” and “Oh, Daisy” that were more classic bedroom pop, then started bringing in heavier guitar on tracks like “I Don’t Like Ur Friends,” was firmly in the alt-rock vein for “Juliette” and then went completely off the rails for “Eat Spit!”

“I think I’m constantly changing as an artist and I never want to find myself in a sound. I never want to put myself in a category of this kind of artist. I want to make all different kinds of music. Whether it’s on my project or producing for other people… And I love all music. I didn’t want to put myself in one box. And I know if I dropped the same kind of stuff all the time, people would get bored of it and only like a few songs,” Slush Puppy said.

He partly attributes the heterogeneity of his sound to his vast musical exposure during childhood. Originally hailing from San Diego, Slush Puppy inherited his musical ability from his musician father who also taught him to play the guitar. He was raised in a home surrounded by music where he listened to everything from Black Sabbath to Depeche Mode to Wham. A particular favorite was George Michael, especially his song “Waiting for That Day.” He said that as a child he was drawn to Michael’s voice and the melodies of the track.  Slush Puppy cited Michael as a major influence though admitted it’s not too apparent in his music.

In no way shape or form does his latest track sound anything like Michael. “Eat Spit!” is the perfect anthem for a summer that was promised to one of hedonism after a repressive year filled with nights of take out dinners alone with our pets. With lyrics like “Bad bitch, queen shit, icon, Eat spit, get dicked with the lights on,” “Eat Spit!” is a call to arms to get down with your dirtiest, nastiest self. The track is the hardest release to date from Slush Puppy with growling vocals that give it a metal edge while fusing elements of alt-rock and hyperpop with a beat that you can’t help but move to.

A collaboration with Royal and the Serpent, Slush Puppy said track has gained notable attention on TikTok amassing him 80,000 followers and millions of views. He initially wrote the beat for the track when he had COVID-19 in January but didn’t begin work on it until May when he began collaborating with co-producer Pink Slip. Eventually, Royal and the Serpent came on board and Slush Puppy said the track came together very quickly. He said that he feels liberated by the success of the track to explore all sides of his creativity.

“It was honestly a side of me that I’ve never shown or put out. And I didn’t actually even know I could do that. It was very new to me to be honest. And it opened a lot of doors of wow, I don’t want to put myself in a box,” he said.

Up next, Slush Puppy plans to continue to push boundaries and release new music.

“I want to go and make music knowing that I have so much music, but I was making it when I was very boxed in on a certain sound. But putting out this song really opened my eyes and ears to just making something new that people really would expect and really not trying to sound like anyone else. So, I’m just going to make music and see where it goes,” he said.

He also performed at our WFNM showcase on August 5! Be sure to stream “Eat Spit!” out now.