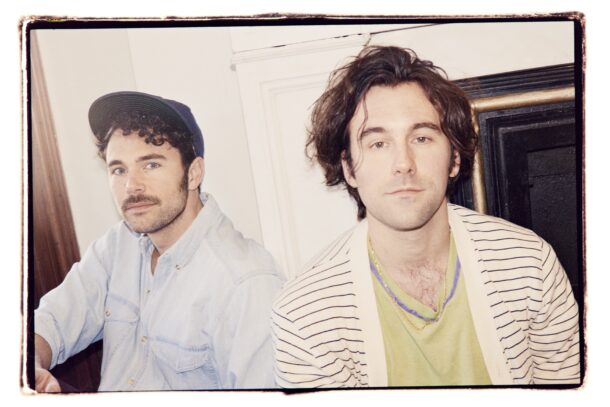 Wistful indie-folk band Tall Heights has traveled down a very unique road to get to where they are today. Once buskers on the Boston streets, the duo’s immense dedication to their craft has always shined through. Now they perform at different venues around the world and it is incredible to see how far they have come. The talented twosome is used to fighting for what they want. With this recent pandemic, that persistence and strength have helped them get through these unprecedented times. Their latest single “Locked Out” which is off their forthcoming full-length album Juniors, narrates the personal struggles they have faced in such a graceful and stunning way. The soothing vocals glide over a delicate, soaring soundscape, providing listeners with a sense of comfort.

Boston natives Paul Wright and Tim Harrington met through Tim’s older brother. When the two began making music together, they formed an unshakable bond. The two quickly saw each other’s gifts and knew the partnership was meant to be. Wright’s classical training seamlessly meshes with Harrington’s colorful artistry. Both of their unique voices come together to create a sound that is simply spellbinding. That captivating quality once again charms fans in this new tender and heartbreaking release. We spoke with the duo discussing their new single, upcoming album and much more.

WFNM: Your single “Locked Out” focuses on personal adversities you have recently overcome. How have you managed to cope with those hardships you have faced?

Paul: This one is about my wife’s struggle with anxiety and depression and just a particularly dark period for us as a couple. The song is about not knowing how to help it, just being there physically when you can compete with the voices of anxiety in someone’s head. More largely, talking about the record, it’s just been a whole ton of personal turmoil that has coincided with everything. That’s the weird year it’s been for everybody since 2020 and the sort of mentality we are taking on with this record. This batch of songs and looking forward as artists you can drive yourself crazy, trying to figure out what the future will hold for you. Maybe a better way for us is to just stay humble on stay hungry, know that things will change and try to find the beauty in that. Talking about our upcoming album Juniors, because you asked how did you cope? The struggles and the anxiety and everything going on, and what emerged from this period of time was obviously a ton of music. We ended up feeling cut loose and isolated in this house that we were about to move out of, with this fixed timeline of there’s a pandemic, but we need to move at the end of the summer. So we had six months of a dependent of a quarantine in this house that we were living in at the time. With that fixed timetable, and all that isolation, we were able to dig in on the creative side. We were surprised by the circumstances that we’re working within. The whole thing gave us this wide-eyed wonder at the world. We thought wow, we don’t know how this thing works. You wake up in a new reality that you didn’t see coming. You think you have it figured out but you don’t. That’s the ethos of juniors.

WFNM: This past year has been so challenging for so many people, but most of us have come out the other end that much stronger. What is the biggest lesson you have taken away from your struggles?

Tim: We have realized that every song that you write is the first song you’ve ever written. Every day you wake up feels like it is brand new and you don’t, have control over that thing that’s about to happen. What do you do about that? For us we have leaned into each other a lot during this time. We’ve realized the value of our friendship like never before. Especially since we’ve moved out of the house that we were living in together. Now we have really turned to each other and created a lot of art. We have tried to keep smiling on that big climb. Not that we have been smiling the whole time. A lot of the things that were happening during the creation of juniors has continued. I am still so in touch with that feeling of out of control.

WFNM: Your emotive vocals sing such heartbreaking lyrics but it is juxtaposed with effervescent arrangements evoking a feeling of optimism. How was track developed?

Paul: This record is different from Neptune and Pretty Colors given the circumstances of COVID, we were building them out in our little home studio. It’s just, a room on the third floor of the house we live. It’s nothing glorious, but we were moving quickly from the writing phase into the experimental tracking phase, demoing a song out. In the end, rather than having this huge period of months between writing a song and getting into a studio and recording it, we move pretty seamlessly, and sometimes simultaneously between writing and tracking. There’s a lot of trying. Trying some cello, trying the mode that Ben Folds gave us and just adding layers on our own without a band around us. Hopefully that has come through in the tapestry.

WFNM: Your story is so inspiring. You started your career as buskers on the streets of Boston and now have performed in packed venues across the globe. What drives your passion and keeps you going even when things get tough?

Tim: Well we are obsessed with this pursuit. When we spend a long time, not on the road, there’s a tinge inside of you like there’s something missing. You start to fall out of touch with something, a part of yourself that’s like really important to you. Then on the writing side, we just wrote. We started writing music as teenagers. It comes from this sense within yourself that you have something to offer. It’s when you think I’m important enough to write a song you should care about. Then you have this undying idea that there’s something inside of you that you’re trying to express that is for one reason or another worth the share. We have never chased commercial radio success. It’s just been because we really like to write songs. It’s always been a means of self-exploration. We have been writing with each other for a long time. It is this joint and shared pursuit of asking what’s it all about? Especially playing this backyard tour, and getting a more personal interaction with fans.

WFNM: Talking about shows, is there a particularly memorable moment you can recall from one of them?

Paul: Let’s focus that question on the backyard tour. I think that finding ourselves playing in backyards is the most junior thing you can imagine. Just being in LA I always think about the time we played at the Greek. It was a magical evening but being in a backyard has been magical in its own way. It is a really cool neighborhood thing. I’m thinking about the show in St. Paul, where multiple neighbors were combining their backyards. They were so proud of us and got this two-tiered yard thing. I think especially once we got out of New England, it felt like it had been longer since we had done anything out in the Midwest, the Mountain West or west coast. The energy from folks who were just so excited to see music was really amazing.

WFNM: The relationship between the two of you really flourished in high school when you both took up the guitar and began creating music together. What has allowed you to be so connected and in tune with one another?

Tim: It’s weird that we still like hanging out and we still like writing songs together. It is weird that we have yoked our lives together to this extent. But I’ve always loved the way Tim writes songs and I think vice versa is true. Shared creation is the vehicle for self-discovery. We both have this incredible curiosity about our daily existence. We both find interest in the mundane existence of a person. We have shared interests in other ways too. We love to go jogging and hiking. We are just pals and it has been that way for a long time.

WFNM: Speaking of being connected, would you say your music tastes are aligned? What are some of your favorite artists or bands?

Paul: We come from different places musically but our tastes are very much aligned. We were just in Boulder hanging out with someone who’s been a musical hero for us for a longtime, Gregory Alan Isakov. My background is classical music. My songwriting grew out of a different place from Tim’s. I think with my earliest songs I was trying to be Counting Crows or Damien Rice. We love lots of folk such as Frank Ocean, Bon Iver and Anais Mitchell. We are inspired by our friends as well. Darlingside are dear friends of ours and a true inspiration to us.

WFNM: What is on the horizon for Tall Heights?

Tim: We are going to wrap the backyard tour soon. We have got one week left on the backyard tour. Then we switch into full hog Junior’s release mode and the album drops in January. We will be doing a full national tour in the late winter. Then comes spring in summer and we don’t know what that looks like but certainly we will be promoting a record we really care about. We are really proud of this one. This is the most Tall Heights record we’ve ever made because we were doing everything on it. Of course we had other guests performers, instrumentalists, and singers but we are so absurdly involved in every little detail of the process. So you ask what is coming up, just trying to spread the word about the record.