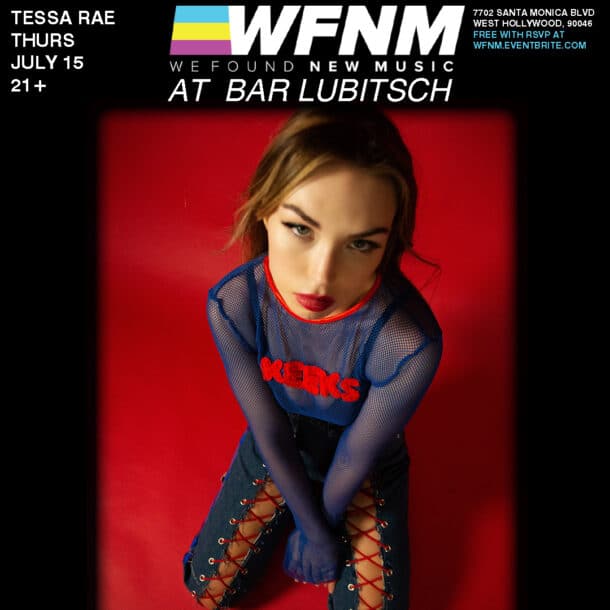 Tessa Rae is an artist who is impossible to pin down. Ranging from guitar heavy folk to alt-rock to vintage inspired nostalgic pop, Tessa Rae is a dynamic artist whose mercurial style never distracts her from remaining unapologetically herself. She describes her recent and upcoming music as “fun heartbreak music,” elaborating that it’s music with sad content that you can dance to. She said she sees everything as a juxtaposition between light and dark and this concept is played out in her “fun heartbreak music.”

Her ever changing style comes from her varied taste in music which ranges from pop to hip hop, rapper Atmosphere is a favorite, to alt-rock to metal. Growing up she was heavily influenced by the musical taste of her father who along with her mother owns Wasteland, a vintage clothing store in LA. Together they would listen to artists like Mazzy Star, “Fade Into You” was one of her favorite songs as a child, and Fiona Apple, Smashing Pumpkins, Joy Division, Sonic Youth and the White Stripes.

Nowhere are her alt-rock roots more evident than on her latest single “Bye Boy.” The track marks a dramatic progression into the rock arena with whining guitars, heavy synths, heart-pounding drums and haunting, moody dream-like vocals. Tessa Rae said the track came together in a whirlwind session over the course of one evening after taking Vitamin B15. Propelling on an almost superhuman boost of energy with the vitamin coursing through their veins, Tessa Rae and her team wrote the song in about an hour and completed the track in one night. A feat she explained was rare. According to Tessa Rae, the song is about a sad acceptance that someone is the way they are and that you can’t change them. The moody track has major 90s grunge pop diva vibes while sounding wholly herself.

Tessa Rae is also a passionate advocate for mental health. After suffering from depression and anxiety herself, she understands how isolating struggles with mental health can be and believes that conversations about the subject are an important step forward in destigmatizing mental illness. She said that when people open up to her about their struggles and their feelings it really humanizes people and allows for a real connection to occur. She also feels that it’s important to talk about it in her music as it makes people feel less alone and that they’re not that different from others.

Up next, Tessa Rae plans to release new music, which we will excitedly watching out for, and get back to performing live shows. She will be performing at the WFNM showcase on July 15 at Bar Lubitsch and be sure to stream “Bye Boy” out now. Catch her interview for our radio show up now.