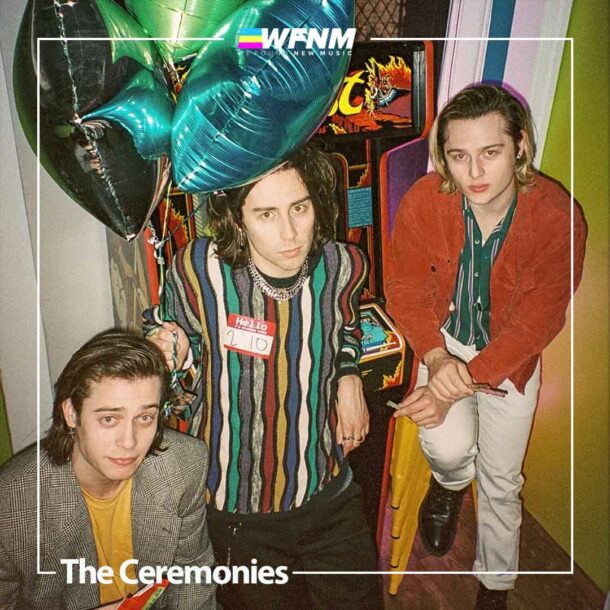 THE CEREMONIES at Madame Siam on 10/1

For Los Angeles natives, The Ceremonies, music isn’t just a past time but a spiritual, communal experience. Even their name, in their own words is based on “communal gatherings where people come together to experience both life’s highs and lows… events that can ranges the entire spectrum of human emotion.” Comprised of brothers Matthew, Mark, and Michael Cook, the brothers dapple in a vast array of artistic ventures, from visual art to creative writing and of course, music.

Though fully immersed in fine arts today, this mutual love for the creative fields wasn’t always so evidently present. Matthew, the eldest of trio, recalls a deep fascination with music from adolescence. While his brothers were busy playing sports, Matthew was cooking up melodies in his head. Those melodies would later become the foundation of the classic, yet cutting edge indie rock/pop sound The Ceremonies exude today. As time went on, brothers Mark and Michael began to take interest in some of the music occupying Matthew’s mind. From The Beatles to ‘80s post-punk groups such as Echo & The Bunnymen, The Smiths, and The Cure, the brothers bonded over the power of music and with that The Ceremonies’ sound began to form.

Twisting and contorting into the sonorities present on their debut self-titled EP, released in 2013 and housing fan favorite “Land of the Gathering.” An explosive, bang-your-head-it’s-so-damn-good-kind-of song, “Land of the Gathering” encapsulates the groups’ inclusive and electric energy. A fun-loving track inspired by the likes of Michael Jackson, The Beach Boys, The Righteous Brothers, and Arcade Fire, the listener falls into a sort of hypnotic euphoria, drawn in by the heavy, pulsating drums, soaring synths, and glistening harmonies, showcasing a vocal blend only being bound by blood could produce. Though keen on creating music that taps into philosophical thought while championing stellar songwriting, The Ceremonies true religious experience occurs through their live performances.

Having traversed the many peaks and valleys of the world, the trio has garnered an impressive set of live performance chops. A prominent focus for them, the brothers revel in the theatrical elements of performance, blending it with components of a raucous rock n’ roll show. Dedicated to personifying the communal experience that their name exemplifies, the show is meant to be a type of ceremony; one where a community of individuals can find peace and acceptance in the holy communal offering of music.

Interested in participating in the ceremony yourself? Los Angelenos rejoice, as The Ceremonies will be gracing the We Found New Music stage at Madame Siam on Tues., Oct. 1! Log the date in your google cals now and be on the look out for their highly-anticipated debut album, rumored to be to be in the works as we speak!