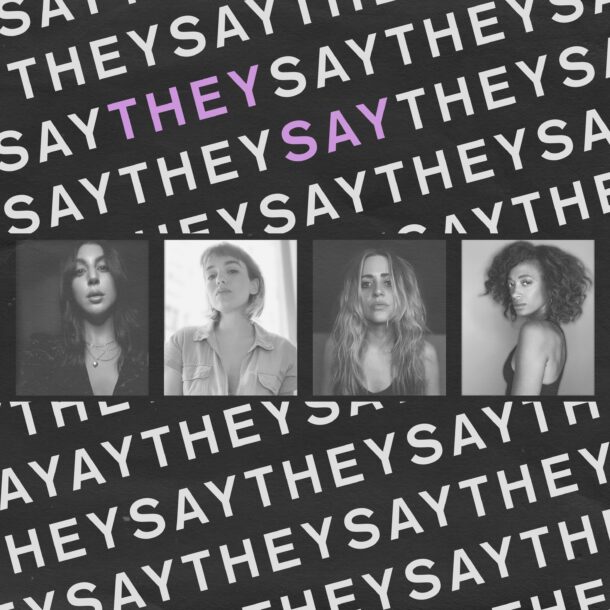 Penned originally by Jessica Vaughn, professionally know as LACES and owner of Head Bitch Music, the story of “they say” is based off her own experience with healing from the sexual assault she underwent as a young artist in the music industry. Metamorphosing through that experience into the strong survivor seen before us today, “they say” is a commentary on living with trauma in a world that encourages us suppress it at all costs.

A story of empowerment and rebelling against the oppressive status quo, the lyrics present a string of intrusive microagressions and outdated clichés which haunt those suffering with trauma from sexual assault. Allowing for the voices of the silenced to be heard, they share the perspective of the survivor, recognizing the ongoing existence of pain while seeing their power concurrently.

Sharing the track with friends and fellow female artists FLAVIA, BELLSAINT, and Amanda Brown, they too felt moved by the message, offering their voices in support of the cause. Opening over chords plucked on the piano, overlaid with atmospheric sonic layers, LACES gently begins the procession followed by the voice of the feminist activist and unapologetically queer artist FLAVIA. Joined then by the renowned songwriter, BELLSAINT and lastly by afro-latina vocalist, Amanda Brown, whose back up vocals have been featured in the likes of The Killers, Adele, Justin Timberlake, Alicia Keys, etc, the quartet express in tandem with each other’s musical energies, allowing for a cathartic release of emotion.

Ultimately, an inspirational tribute to the power of woman supporting woman, “they say” is a reminder to all survivors that they are not suffering alone and that their voices deserve to be heard.

Listen to “they say” below!