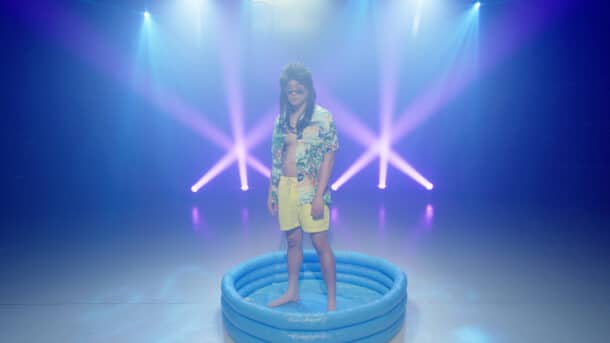 Directed by Brad Michael Wong, Arizona-based artist Vincent Liou released the official music video for his track “Big Surf”, which is the fourth and final song on his 2021 EP – also titled ‘Big Surf’.

The music video was clearly a fun process, as it was both Vincent’s very first time shooting a real music video, and his first time wearing a mullet wig – something he doesn’t do everyday. The music video shoot itself featured quite a few different scenes, including a big studio and warehouse and a local park in the community. With a vaporwave theme in mind, it was the perfect aesthetic for the 80’s city pop vibe.

With the task of creating an infectious bop in mind, Vincent Liou looked to convey Japanese city pop vibes through a synth-heavy production but sonically embody some of the great contemporary indie-pop acts through his dreamy vocals. The danceability and groovy guitars, alone, were enough to achieve this incredible feat and goal.

In essence, “Big Surf” is a metaphor for the last time that Vincent Liou was happy. For Vincent, this refers to pre-pandemic times when he thought he had found someone he felt emotionally and romantically connected to. Ironically enough, Vincent actually wrote “Big Surf” while laying in his ex-fling’s bed while he was in a rather euphoric state.

While the relationship didn’t work out, this doesn’t mean Vincent didn’t enjoy this experience and even references his first date as a way of retaining this joyous memory while it lasted. At its core, the song was written with the hope of inspiring others to take life a little less seriously at times, to not forget about enjoying yourself, and just be unfiltered and have fun.

Check out the incredibly eclectic and fun visual for “Big Surf” HERE:

“I hope this song makes you boogie down, even if you are feeling down.”

With several more incredible music video concepts to look forward to this year, Liou is ready to shake up the music industry and captivate America with his witty and comical approach to songwriting.