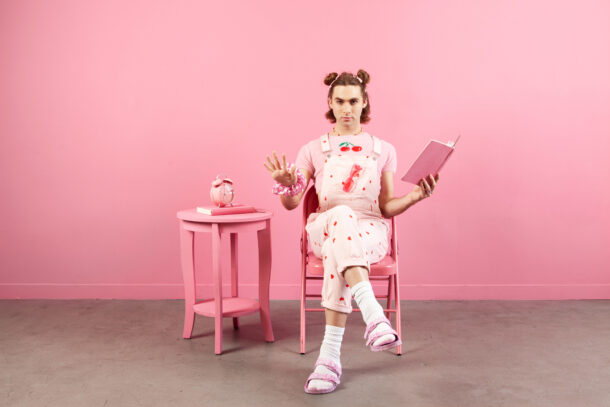 We speak to Jarid Root on his debut EP and more

When you’re putting together a Debut EP, you want to make a strong first impression, you want to give people a glimpse of what you’re all about and what you can become in time. In a way, your debut EP is sort of like a sales pitch, and with the right selection of songs, you can ensure people “invest” in you as an artist, giving you the attention and support that you need to grow. Thankfully for Cali-based, multi-hyphenate artist Jarid Root, his debut EP “Devil’s Advocate” is nothing if not impactful.

“Devil’s Advocate” is a textbook example of what to do with a Debut EP. Jarid didn’t just show us what he can do as a vocalist, he took care to challenge himself with some astounding songwriting that took a lot of honesty and openness on his part, and he put together something that resembles a conceptual piece more than it does an Extended Play. The project shows a great deal of ambition and a very clear vision that gives you a very good idea of what he’s gunning for with his career.

This ambitious release didn’t come without its fair share of difficulties, and that’s what’s fascinating about it: Song after song you can hear the struggle of both the man and the artist (two distinct but inextricable sides) with both himself and the world around him.

Join us today as we pick his brains on this release and what lies ahead.

What motivates you musically, Jarid? If there’s something you want to achieve in your career, what is that?

Music has always been the way I can take the thoughts trapped inside my head and lay them out on paper, so writing music for me has always been a form of therapy that chronicles the experiences I’m going through currently in life at that point.

But I’ve noticed that my mind, in general, tends to look at life in a bigger picture, and I get a little tripped out by the vastness of it all. So I kinda found myself writing about issues that I was a part of, but were bigger than me, which is where my social and political awareness finds its way into my music.

But overall, I would say what motivates me is the desire to relate to others, and for others to be able to see themselves in my music. What I want to achieve in my career is to create a creative space that people like to sit in, and stick around for a while. It would be a dream for me to create a Jarid family.

You deal with a lot of serious topics in this EP. From Mental health to School shootings you don’t seem likesomeone who’s at all intimidated by difficult subjects in songwriting. Is there a topic in particular that interests youthat you perhaps haven’t gotten the chance to explore in-depth with your music?

I think my debut EP “Devil’s Advocate” highlights an era of my life that happened a few years ago, and like, perfectly encapsulates the emotionality of how I felt at the time. I was 17, I wasn’t fully myself yet and it felt like I was gaining a lot of clarity, but also like the world was falling apart. So in a sense, this EP is just a big burst of flailing, unhinged emotion that screams 17-year-old me.

But I’m 21 now, I’m in a different era of my life, where I’ve officially come out, and my romantic life isn’t such a secret anymore. So I want to tackle the idea of relationships, and get more personal about me in this next batch of music.

However, I do have some topics that I want to delve into soon that have really resonated with me recently. I watch a lot of biopics and true story documentaries, and I would love to dive into the idea of the obsessed Artist, and my experience with striving for perfection in my craft and my life in general. The idea of internet celebrity, and celebrity culture in general, I would love to piggyback off of those ideas, since it’s what my mind naturally gravitates towards.

From this EP,a lot of it is very clearly Therapeutic in away. Is there a song in particular that you felt was moredifficult to “get done” than others?

OH definitely!! “My Bed’s A Magnet” and “A Jokester” were two really hard songs to get through, granted it was a very cathartic experience for me, I was in some really rough patches emotionally.

When I was writing “A Jokester”, I was journaling about the fact that I was immensely depressed with myself and my life, but I literally wasn’t telling anyone about it. I was just suffering in silence, and I hadn’t found anyone to confide in about it. And I dealt with that by singing the lyrics through the voice of a boisterous clown in a circus show narrative. But that helped me understand my feelings more at the time.

During “My Bed’s A Magnet”, I had just been cheated on and while writing it, I’d realized all the BS that I had put up with up to that point, and I was like “What the h*ll? Why am I letting

myself be trampled on right now?” So the song had an unleashed tone of anger to it, but also an immense sadness to it.

Because as mad I was, I was also so sad, because with every relationship comes good and bad, and so the prospect of losing the good parts was difficult for me to emotionally handle, so I just slept all the time, because I didn’t want to be awake to feel those feelings.

How would you describe or define your own sound right now?

Definitely more pop, with orchestral and movie-like influences. I have a lot of strings in my music, and some audio bits from movies and other media that all build-up to this big “moment” that just explodes.

If you could collaborate with another musician right now, who would they be?

I would love to collaborate with Sub Urban or Melanie Martinez. I’ve been a long-time fan of Melanie ever since “Dollhouse” came out in 2014, and the way she frames her artistry is so so fun and alluring. And if I were to compare my songwriting to anyone, I’d say we’re pretty similar.

And soundwise, I absolutely LOVE circus music, and the fact that Sub Urban taps into that sound and combines it with modern pop is an orgasm to my ears. I’d love to collab with him on anything.

Do you feel it’s important to play “Devil’sAdvocate” now and again to achieve an honest discourse?

I think playing devil’s advocate can definitely fall on the side of making a terrible argument, but yes, I do believe seeing arguments from all sides help to achieve an objective view on an issue.

However, in my EP, it’s not that I’m on the bad side of these arguments. It’s more so the fact that, in society, playing devil’s advocate can be controversial. And the sole fact of boldly inserting my strong opinions on these very prevalent issues in society is controversial in itself. So in a sense, I’m really playing devil’s advocate with my own life and beliefs, essentially stating opinions about issues that a lot of people don’t want to hear or face.

Acting is a really big part of who you are artistically, which is a side of you we also get to see in your music videos.Go wild here and tell us what sort of role you dream of playing in the future?

Ooooo, I love this question! I. absolutely. adore. the Obsessed Artist trope in movies. And I love biopics.

I would love to play a real person in a true story, preferably an entertainer or an athlete who goes to incessant lengths to achieve perfection, meanwhile destroying parts of themself in the process. I think those levels of character study in movies are so fun to delve into, just completely taking the inside of someone’s mind and their overactive ambition and folding it inside out.

Playing a role with that much intensity would be such a cathartic experience for me, and transforming into someone completely different physically would be a moment in my life to talk about for ages.

You’re also often on the other side of the camera as well, in the role of the Writer, Editor, and many others instead.Do you see yourself directing a major full-length motion picture someday?

I definitely could, but only if I were in it. I have too much of a love of being on camera, and emotionally playing out those feelings, I’d have to be involved in front of the camera as much as behind. And I’d love to direct something that I wrote, something that’s close to my heart, like a family drama that involved a ton of raw arguments and “aha” moments that make the audience go silent. That would be such a dream.

You’ve said that It took a long time for you to open up and come out asgay and that this is a fairly new stage in yourlife. There must be a huge sense of relief, but I imagine there’s a new set of circumstances for you to deal with now.

Being in an environment that’s more accepting now has definitely lifted a huge weight off of my shoulders. And there aren’t a huge amount of new circumstances I have to deal with, other than the usual amount of online homophobia and in-person judgment.

Honestly, I’d say more of what I deal with now are the repercussions of having to keep my sexuality a secret for so long. It’s a really traumatic experience for the biggest thing wrong with you to be the fact that you’re gay, something that you can’t change no matter how hard you try.

And being in a volatile environment that doesn’t accept that for 7-8 years, you go into survival mode and you black a lot of it out. And once you’re out of that mindset of surviving, you start to

look back on all the things that happened to you and realize how abnormal and inhumane they really are. So most of what I’ve been dealing with now, having freshly come out is coming to terms with what I had to deal with at such a young age, being 15-16 at the time.

What’s next for Jarid Root?Any upcoming live shows or projects to get excited about?

Still working on live shows, I may have a live performance for some industry execs soon to introduce myself a little bit more. But definitely some more singles and music videos. I also have a movie coming out soon, in which I co-star along Greyson Chance, which will be my first film debut. A lot of exciting stuff! But still working on the grind.