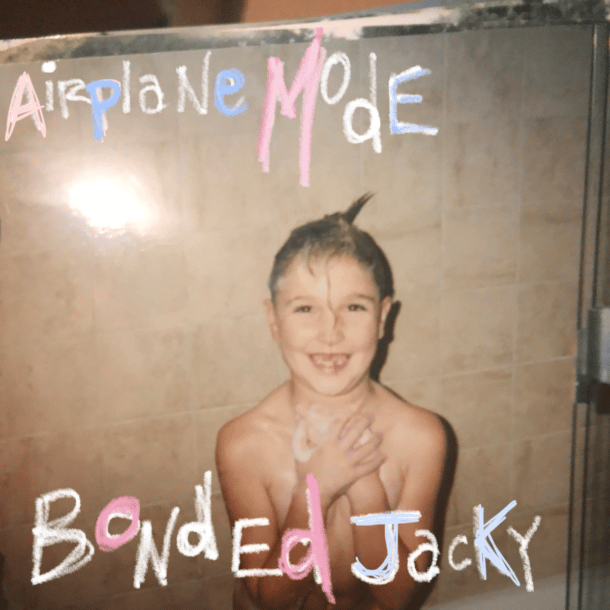 “Maddie Ballard, who performs under the music alias, Bonded Jacky, is a queer, LA-Based musician Pop and songwriter; a gangly girl with an unmistakeable schoolboy energy.”
It’s one thing what people present themselves as and what others perceive them to be, and this is -a lot of the time- the source of much conflict and pain between the people. Who do you see when you see Bonded Jacky? How would she like to be perceived? Does she have to turn “Airplane Mode” on all the time?

Bonded Jacky seems to me an incredibly well-balanced musician. Not only does she have great vocal qualities, but the melodies and beats she works with are ecstatic -sublime even- and I feel that that’s surprisingly rare nowadays. We often see really great artists whose vocal performance tends to overshadow the music or even the lyrics, but Maddie Ballard is in turn someone very thorough who has a much better view of the whole picture than many of her contemporaries.

The moniker, Bonded Jacky, comes from the nautical term meaning sweet cake or tobacco, which is perfectly absurd. We’re all one big walking paradox with a story to tell. – Bonded Jacky
“Airplane Mode” deals with perception and identity. it’s a sweet and candid confessional about putting on an act for other people at first, not to trick and deceive them, but to safeguard against judgment and to avoid overwhelming them with the “finer points” of one’s personality. I think that everyone can relate at least a little bit to this sort of acting, but for people like Bonded Jacky who freely admit to being goofballs, the prospect of meeting someone new that they really like can be a bit of a daunting task, requiring they put walls around themselves and show a very different demeanor than their normal self to feel secure enough to interact.

“When I first meet someone and really like them, I find myself holding back parts of myself that may change their mind about me. I put on a quiet and mysterious front, when in reality, I’m an absolute goof. This record is an ode to all of the goofs out there who try to act cooler than they are.”

The theme of “acting cool” is something that seems to mean a lot to Jacky who is currently preparing an EP titled “Cool People Don’t exist” which is all about taking on the “myth” of cool people, humanizing a bit the sort of people that some tend to idealize because of how “above it all” they may seem to be. One thing I enjoyed about how jacky explores this subject is that it comes from a place of modesty and self-examination with a bit of humor and even tenderness thrown into the mix, there’s no hint of self-righteousness or bitterness about any of this, and I think that’s what makes “Airplane Mode” so damn cool.