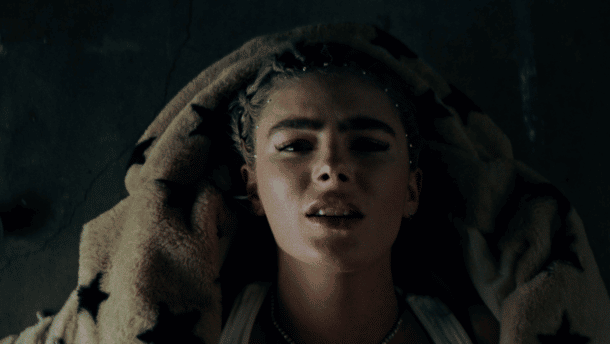 Courtney Paige Nelson’s back with “Self-Medicate”

The last time we had Courtney Paige Nelson on, we had the opportunity to take a detailed look at “Bury It”, a song that -above all else- brilliantly testified her life-long love of poetry with its colorful prose at the service of some rather grim imagery that represented how toxic relationships can take a toll on people’s psyche, turning them into figurative “living dead” versions of themselves. This time around, we’re taking a look -in the more literal sense- to Courtney’s newest music video for her single “Self-Medicate”

Courtney is someone who started out modeling and had her first big break in America’s Next Top Model, Cycle 23. You can see how much the camera “loves her”, as her natural charisma and enthralling looks just make every visual tool for her to tell her story the way she wants to. The music video takes heavy inspiration from HBO’s hit series “Euphoria”, from the aesthetic use of colors, lights, and shadows to perhaps a more general use of subtle imagery showing a young life spiraling out of control in the breast of decadence, however, the lyrics tell a bit of a different story.

Courtney says.” with this video, we wanted to incorporate that and show the isolation aspect of what it means to be in a public space but have a separate reality in your head. Having scenes where I’m stumbling through a party was important for me to show how I feel internally sometimes.”

It’s clear that the aspect of “self-medication” isn’t so much about taking refuge in substances to cope with social situations. Though I suppose the song can be taken as an indictment against just that, Courtney is comparing instead the effects of deep social anxiety to those of dissociative anesthetics; something that everyone’s who’s experienced something like an anxiety attack followed by depersonalization will most likely describe.

The music video was directed by Luke Shaw and Damien Belden, who Courtney praised for their huge creativity and ingenuity “The directors came up with the idea to do the newspaper shower scene and they actually built the set themselves in their garage with a makeshift shower and makeshift walls. It was extremely creative, time-consuming, and honestly really badass.”- The result speaks for itself… I think the three of them should definitely work together again!